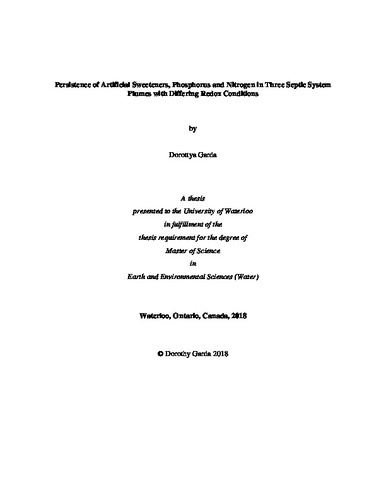 Septic systems are widely used for on-site wastewater treatment throughout Canada, including at most of Ontario’s provincial parks. They are frequently located in unconfined aquifer systems that may also be used for water supplies, thus the potential for contamination from constituents such as nitrate (NO3-), phosphate (PO42-) and more recently, pharmaceutical compounds and personal care products is a concern. Degradation rates for these constituents vary in differing subsurface environments and remain poorly understood. In order to establish degradation potential, there is a need for tracer compounds that can clearly identify groundwater impacted by wastewater and, additionally, techniques must be available that allow age estimates for such impacted groundwater so that rates can be determined. Unfortunately, conventional groundwater age dating techniques such as use of tritium, tritium/helium or carbon 14, are ineffective for dating young groundwater less than several years old, which is the time frame of greatest interest with respect to degradation potential. In this study, a novel approach was undertaken for obtaining age estimates for 'young' septic system impacted groundwater. Sampling was undertaken at three septic system sites (campgrounds) where wastewater loading occurs only during the summer season, then monitoring was continued throughout the winter period as the plume water aged. Using this approach, plume samples were acquired that ranged in age from a few days to eight months, which is the critical time frame needed for revealing degradation potential. Artificial sweeteners such as potassium acesulfame (ACE) and sucralose (SUC) have been found to persist during wastewater treatment and in groundwater flow systems and have been proposed as powerful wastewater tracers because they are unique to this source. However, additional insight into their degradation potential in groundwater environments is required to more fully exploit this potential. The objective of the current investigation was to gain new insight into degradation rates of N, P and artificial sweeteners in septic system plumes. Three study sites, which are seasonal use campgrounds, were specifically selected to represent a range of redox conditions. Craigleith is the nitrate rich (NO3-) site; Six Mile Lake is the ammonium (NH4+) rich and high iron (Fe2+) site; and Long Point is a NO3- depleting site. Extensive groundwater sampling took place at each of the three sites from multilevel piezometers, during both the on-loading and off-loading periods from 2015 to 2017. Groundwater ages were established based on loading rates, migration distances, seasonal breakthrough of electrical conductivity (EC) and time lags after termination of sewage loading in the fall. Artificial Sweeteners: Acesulfame (ACE) and Sucralose (SUC) decay trends with increasing groundwater age were compared to modeled decay curves that would be expected for first order decay rates with half-lives of 4 and 12 months. Trends were further refined by correcting values for dilution based on chloride (Cl-) concentrations. Rapid ACE and SUC decay were observed in the unsaturated zone, whereas ACE and SUC became much more persistent once they entered the groundwater flow system. Between the three sites, half lives (t1/2) in the unsaturated zone for ACE and SUC ranged from 0.15-2 months and 0.2-2 months, respectively. Half-lives in the groundwater zone for ACE and SUC ranged from 4-35 months and 2-35 months, respectively. Nitrogen: The wastewater plume at the Craigleith site is well oxidized and nitrogen occurs almost completely as NO3--N. As groundwater aged in the distal zone during the non-loading period, isotopic enrichment of both δ18O-NO3- and δ15N-NO3- was observed. The ratio of enrichment (R2=0.81-0.83) indicated that denitrification was likely occurring, but at a very slow rate (t1/2 = 70 months). In contrast, at the Six Mile Lake site where the wastewater is only partially oxidized due to the shallow water table, a greater amount of N attenuation occurred in the proximal tile bed zone (~ 80 %) and at a faster rate with half lives ranging from 3-8 months in the groundwater zone. It is likely that anammox contributes to the robust N attenuation observed at the Six Mile Lake site. Phosphorus: Phosphorus, as soluble reactive phosphorus (SRP) was highly attenuated in the vadose zones and/or the groundwater zones at all three sites. Phosphorus depletion occurred at a rapid rate in the unsaturated zones, where half-lives were less than a few weeks at both the Craigleith and Six Mile Lake sites. Chemical equilibrium modelling and electron imaging of sand grains indicated mineral precipitation reactions, in the form of Fe-P minerals which likely contribute to P attenuation at Six Mile Lake. The decay rates in the vadose zone (<0.1-0.2 months) and groundwater zone (1-7 months) demonstrate that P attenuation occurs rapidly after the wastewater enters the subsurface, which is consistent with mineral precipitation. Monitoring during the off-loading period provides insight into artificial sweetener, nitrogen and phosphorus loss in groundwater by observing concentration differences between initial concentrations in young wastewater during active loading and aging wastewater during inactive loading. This approach of monitoring seasonal use septic systems during the off season, has proved very useful in providing new insight into degradation potential for these critical wastewater parameters.