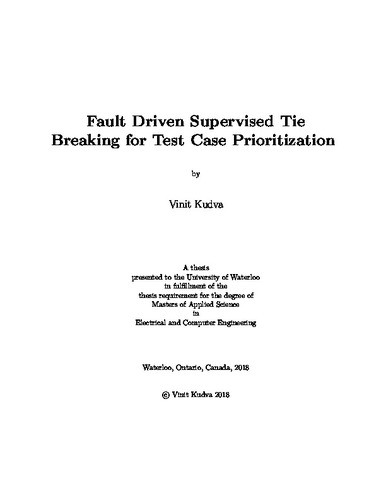 Regression test suites are an excellent tool to validate the existing functionality of an application during the development process. However, they can be large and time consuming to execute, thus making them inefficient in finding faults. Test Case Prioritization is an area of study that looks to improve the fault detection rates of these test suites by re-ordering execution sequence of the test cases. It attempts to execute the test cases that have the highest probability of detecting faults first. Most prioritization techniques base their decisions on the coverage information gathered from running the test cases. These coverage-based techniques however have a high probability of encountering ties in coverages between two or more test cases. Most studies employ a random selection to break these ties despite it being considered a lower bound method. This thesis designs and develops a framework to supervise the tie breaking in coverage based Test Case Prioritization using fault predictor models. Fault predictor models can assist in identifying the modules in the application that are most prone to containing faults. By selecting test cases that cover modules most prone to faults, the fault detection rate of the test cases can be improved. A fault prediction framework is also introduced in this thesis that supervises the tie breaking for coverage-based techniques. The framework employs an ensemble learner that aggregates results from multiple predictors. To date, no single predictor has been found that can perform consistently on all datasets. Numerous predictors have also required expert knowledge to make them performant. An ensemble learner is a reliable technique to mitigate the problems and bias faced by single predictors and disregard results from poorly performing predictors. In order to evaluate the supervised tie breaking, empirical studies were conducted on two large scale applications, Cassandra and Tomcat. As part of the evaluation, real faults that existed in the application during development were used instead of hand seeded faults or mutation faults as used by many other studies. The data used for fault prediction were also not groomed or marked by experts, unlike other studies. Results from the studies showed significant improvements in the fault detection rates for both case studies when using the fault driven supervision for tie breaking.