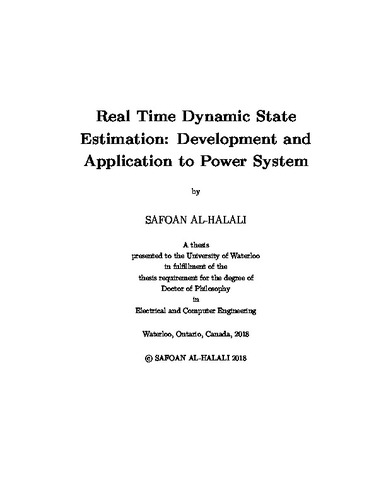 Since the state estimation algorithm has been firstly proposed, considerable research interest has been shown in adapting and applying the different versions of this algorithm to the power transmission systems. Those applications include power system state estimation (PSSE) and short-term operational planning. In the transmission level, state estimation offers various applications including, process monitoring and security monitoring. Recently, distribution systems experience a much higher level of variability and complexity due to the large increase in the penetration level of distributed energy resources (DER), such as distributed generation (DG), demand-responsive loads, and storage devices. The first step, for better situational awareness at the distribution level, is to adapt the most developed real time state estimation algorithm to distribution systems, including distribution system state estimation (DSSE). DSSE has an important role in the operation of the distribution systems. Motivated by the increasing need for robust and accurate real time state estimators, capable of capturing the dynamics of system states and suitable for large-scale distribution networks with a lack of sensors, this thesis introduces a three state estimators based on a distributed approach. The first proposed estimator technique is the square root cubature Kalman filter (SCKF), which is the improved version of cubature Kalman filter (CKF). The second one is based on a combination of the particle filter (PF) and the SCKF, which yields a square root cubature particle filter (SCPF). This technique employs a PF with the proposal distribution provided by the SCKF. Additionally, a combination of PF and CKF, which yields a cubature particle filter (CPF) is proposed. Unlike the other types of filters, the PF is a non-Gaussian algorithm from which a true posterior distribution of the estimated states can be obtained. This permits the replacement of real measurements with pseudo-measurements and allows the calculation to be applied to large-scale networks with a high degree of nonlinearity. This research also provides a comparison study between the above mentioned algorithms and the latest algorithms available in the literature. To validate their robustness and accuracy, the proposed methods were tested and verified using a large range of customer loads with 50 % uncertainty on a connected IEEE 123-bus system. Next, a developed foretasted aided state estimator is proposed. The foretasted aided state estimator is needed to increase the immunization of the state estimator against the delay and loss of the real measurements, due to the sensors malfunction or communication failure. Moreover, due to the lack of measurements in the electrical distribution system, the pseudo-measurements are needed to insure the observability of the state estimator. Therefore, the very short term load forecasting algorithm that insures the observability and provides reliable backup data in case of sensor malfunction or communication failure is proposed. The proposed very short term load forecasting is based on the wavelet recurrent neural network (WRNN). The historical data used to train the RNN are decomposed into low-frequency, low-high frequency and high frequency components. The neural networks are trained using an extended Kalman filter (EKF) for the low frequency component and using a square root cubature Kalman filter (SCKF) for both low-high frequency and high frequency components. To estimate the system states, state estimation algorithm based SCKF is used. The results demonstrate the theoretical and practical advantages of the proposed methodology. Finally, in recent years several cyber-attacks have been recorded against sensitive monitoring systems. Among them is the automatic generation control (AGC) system, a fundamental control system used in all power networks to keep the network frequency at its desired value and for maintaining tie line power exchanges at their scheduled values. Motivated by the increasing need for robust and safe operation of AGCs, this thesis introduces an attack resilient control scheme for the AGC system based on attack detection using real time state estimation. The proposed approach requires redundancy of sensors available at the transmission level in the power network and leverages recent results on attack detection using mixed integer linear programming (MILP). The proposed algorithm detects and identifies the sensors under attack in the presence of noise. The non-attacked sensors are then averaged and made available to the feedback controller. No assumptions about the nature of the attack signal are made. The proposed method is simulated using a large range of attack signals and uncertain sensors measurements. All the proposed algorithms were implemented in MATLAB to verify their theoretical expectations.