Synthesis of Polyynes by Femtosecond and Nanosecond Laser Interaction with Matter 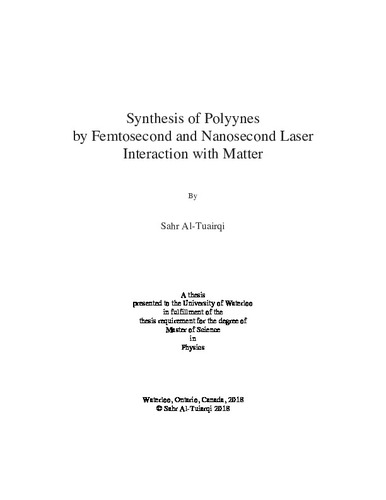 A review of literature including some history and previous work done in the field is done showing the importance of polyynes themselves and as an important precursor in the formation of other interesting carbon nanoparticles for their own unique properties such as fullerene and carbon nanotubes. The review also shows some significant reseach papers connected to the experimental work done in this thesis. Prior to the year of 1985, diamond, graphite, and amorphous carbon were the only 3 carbon allotropes known. In 1985 and while Harry Kroto and colleagues were working in their lab on an experiment involves laser ablation of graphite disc, a remarkably stable molecule that consists of 60 carbon atoms was detected, and was named later buckminsterfullerene. This discovery marked a watershed in the history of carbon allotropes raising a great scientific interest in carbon clusters and their production. Sumio Iijima was stimulated by this discovery to synthesize CNTs for the first time in 1991. MWCNTs are the second strongest material discovered after graphene, and SWCNTs have a thermal conductivity that is 3.5 times that of diamond, which is on the top of the thermal conductors list. Since then, many carbon allotropes have been discovered such as nanobuds and nanowires. Polyynes were reported later to be important precursors in the formation of fullerene and carbon nanotubes rising the interest in polyynes and polyynes productions. Polyynes are one-dimensional hydrocarbon molecules consist of linear chain with even number of carbon atoms alternating single and triple sp-hybridized carbon bonds. Diacetylene is the simplest examples. Because of the high electron mobility in the carbon chains, polyynes have been used as nano-conductors and have been shown to form nanowires by inserting them into SWCNTs. Nanowires have unique properties that are different from the bulk materials. Polyynes have also been observed in nanostructured thin films production and were found to exist in the interstellar medium drawing astronomer’s attention to them. Femtosecond and nanosecond laser interaction with the matter in its liquid, gaseous and solid states to form polyynes is investigated through some polyyne synthesis experiments. The experiments that were done are laser irradiation of organic liquids, laser induced break down in hydrocarbon gases, and laser ablation of graphite. Experimental setup and procedures are demonstrated. UV-Vis spectroscopy, HPLC, and optical emission spectroscopy were used as the analytical techniques of polyynes produced in these experiments. Influence of the chosen targets on the products, the amount of polyynes produced and their purity from each method, irradiation time and pulse energy dependencies are discussed.