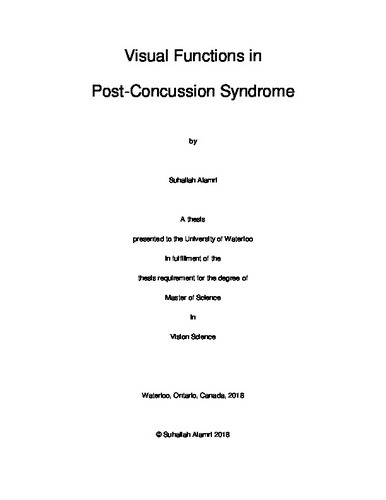 Purpose: Post-concussion syndrome (PCS) is a is a complex neurological disorder in which various concussion symptoms can last for weeks, months, or even years after sustaining the concussion. The PCS population has been shown to have some functional deficits such as balance and visual-motor integration issues in addition to their PCS symptoms. The current study has three main objectives as follows: 1) to establish a comprehensive visual function test battery for use in both control and PCS individuals, 2) to compare performance on the comprehensive visual function test battery in control and PCS individuals, 3) to determine if performance on the comprehensive visual function test battery is in any way related to the symptoms individuals with PCS experience. Methods: Forty-four participants aged 18 - 35 were recruited. The study participant groups were as follows: 1) Healthy participants with no history of concussion (Controls; n=33), and 2) Participants with PCS (n=11). Participants completed two study visits separated by 2 - 7 days. The testing protocol of visit 1 consisted of the following visual function tests: static visual perception, objective refraction, ocular alignment, ocular motility, stereopsis, accommodative function, vergence function, cyclopean eye alignment position, and King-Devick. The testing protocol of visit 2 consisted of visual-motor integration tests including visual-motor reaction time and coincidence anticipation timing, and a test of dynamic visual perception. Results: All control and PCS participants were able to complete all of the tests at each study visit. However, the PCS participants took longer time to complete the study visits as these participants needed breaks to rest between some of the tests. Control participants did not need breaks between any of the tests. A Mann-Whitney U-test was conducted to examine the difference in visual function performance between the groups. Overall, the only difference shown between the two groups was in the ocular motility, King-Devick, cyclopean eye alignment position, and the peripheral visual-motor reaction time tests. In the ocular motility test, 30% of PCS participants exhibited irregular eye movements, whereas 0% of control participants had irregular eye movements. On the King-Devick test, the control group appeared to read faster than the PCS group (p=0.04). On the cyclopean eye alignment position test, which is a measure of global visual function, the PCS group appear to have better performance and made fewer errors in alignment (p=0.03). On the peripheral visual-motor reaction time test, the PCS group also appeared to have better peripheral reaction time than the control group (p=0.04). To examine the relationship between PCS symptom severity and visual function, a Spearman correlation analysis was conducted. For the control group, stereopsis (p=0.02), distance horizontal negative fusional reserve - blur point (p=0.04), distance vertical negative fusional reserve - double point (p=0.01), and recovery point (p=0.02) were found to be significantly correlated with participant symptoms. For the PCS group, there was a statistically significant correlation for a few coincidence anticipation error measures. The vast majority of the correlations between symptom severity and visual function were not significant in either group, which suggests that performance on the visual function test battery is not predictive of participant symptoms. Conclusion: In summary, this study has applied a comprehensive visual function testing protocol that can be used in further research and clinical practice. Eye movement tests such as the Broad H oculomotor screening test, and the King-Devick test appear to have the potential to detect lingering deficits in the PCS population. Additionally, PCS related symptoms do not appear to be related to performance on the individual visual function tests used in the test battery in either the PCS or control individuals.