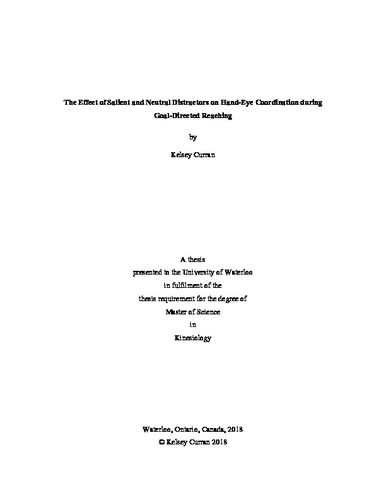 OBJECTIVE: The successful perception of a target location is critical for everyday reaching behaviours. Visually-guided goal-directed action involves successful coordination of both eyes and upper limb movement execution. The purpose of the current study was to understand the impact of display characteristics, such as distractor salience, on hand-eye coupling during goal-directed reaching. It has been demonstrated that more salient distractors affect hand movement deviations less during a goal-oriented movement as compared to less salient distractors, potentially due to a suppression mechanism. Thus, the goal of this project is to further examine whether eye movements modulate the suppression effect as a function of distractor salience. METHODS: Thirty healthy, right-hand dominant participants (15 males; mean age = 23.1 ± 2.97 years) were recruited and had no history of neurological or neuromuscular pathology. Participants executed reaching movements toward visual targets under different display conditions: target only (control), and with neutral or salient distractors. Optotrak motion tracking system was used to record right hand kinematic data and eye movements were recorded using the EyeLinkII eye tracker. Temporal coordination between hand and eye movements were examined during reach planning and execution. Movement kinematics and reach trajectories were also analyzed. RESULTS: Chi squared frequency analyses demonstrated that primary saccades land on distractors approximately 50% of the time; however, reach initiation did not typically occur until the eyes fixated the target. One-way repeated measures analysis of variances showed that the presence and type of distractors affected the planning of primary saccades (p<0.0001), reach-related saccades (p<0.0001), and of the reach movement (p<0.0001). Regardless of the presence of distractors, hand-eye temporal coupling was found to be consistent across display conditions, where the hand typically followed the eyes by approximately 210 ms. Finally, hand movement deviation occurred away from the target towards the upper left visual field, which was dependent specifically on target location but not influenced by distractor salience. CONCLUSIONS: Our complex environments typically contain multiple objects that compete for attention. As a result, we are required to select relevant stimuli from the environment for further representation and processing. This work, which was a probe into complex scenarios, demonstrates that salient distractors affect both saccadic and reach motor planning. However, the presence of distractors is simply what influences reaching execution, irrespective of their salience. It was previously thought that specific cortical regions coordinate eye and limb movements, separately. However, more current literature has shown the temporal correlation of hand-eye coupling during goal-directed reaching, which demonstrates that these neural pathways are likely connected and work together to produce successful hand movements towards visual targets. We found hand-eye coupling to be moderately correlated in a more complex visually-guided reaching task. An upper leftward attentional bias may occur during visuospatial reaching tasks, and as a result, this may provide implications for future design of workspaces such that individuals can successfully function in everyday life.