Culture, carbon pricing and its impacts on CO₂ emissions and economic growth 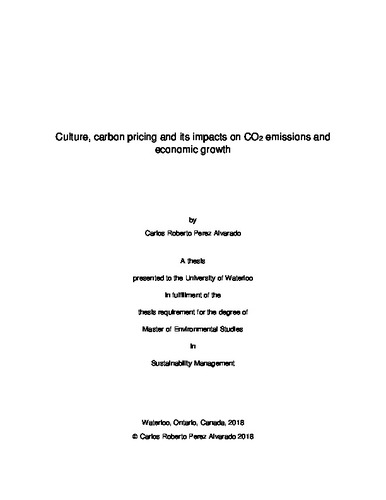 Energy is one of the most relevant factors for economic growth, which is the main cause of CO₂ emissions. Currently, CO₂ accounts for 90% of emissions associated with human-induced climate change. Additionally, the potential economic impact of climate change could reduce annual global GDP between 5-20%, while the mitigation of climate change would cost only 1% of global GDP. In response, an increasing number of jurisdictions have implemented carbon-pricing mechanisms (i.e., carbon taxes and cap-and-trade systems) to reduce emissions, which covers 20% of the GHG global emissions. Under the Paris Agreement, 88 jurisdictions plan to use carbon-pricing mechanisms to achieve their 2030 target emissions reductions. The gold standard for carbon pricing policymakers is to achieve the highest emissions reductions and to cause the least negative impacts on economic growth. Moreover, culture is deemed to play a critical role in shaping climate policies and enabling their successful implementation. This study examined 49 jurisdictions at the national and the sub-national level, using multiple regression analysis and moderation analysis to assess the impacts of carbon pricing on economic growth and carbon dioxide emissions, and the moderating effect of cultural distances on carbon prices. The study utilized the Hofstede’s cultural dimensions framework to measure culture in the jurisdictions. Results revealed that carbon prices and cultural dimensions were able to explain between 1.5% and 67.3% of the variance in the GDP growth rate, with uncertainty avoidance and the interaction between carbon prices and uncertainty avoidance as the strongest significant predictors. With respect to the CO₂ emissions, carbon prices and cultural dimensions were able to explain between 5.5% and 29.2% of the variance in the carbon dioxide emissions growth rate, where individualism, masculinity, and uncertainty avoidance emerged as the strongest significant explanatory variables. Consideration of culture as relevant factors in the development of carbon-pricing instruments is an important step in enhancing the chances of a successful implementation of climate change mitigation policies.