Country Food Consumption Notices: Assessing Awareness and Preferences of Health and Risk Communication Messages in the Sahtú Region of the Northwest Territories 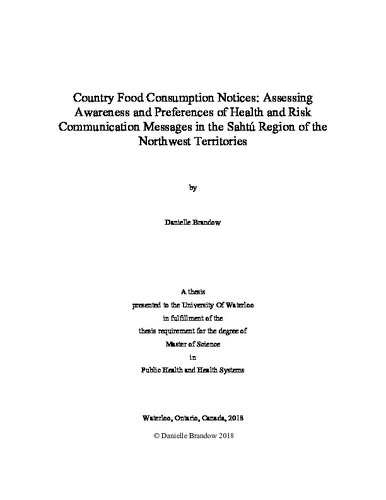 Background: Country food consumption by Indigenous peoples is associated with improved nutrition, food security, and lower rates of chronic diseases (Kuhnlein, Burlingame, & Erasmus, 2013); however, these foods can also pose potential risks of exposure to contaminants such as mercury and cadmium (Berti, 1997). Elevated fish mercury concentrations in some lakes in the Sahtú region of the Northwest Territories (NWT) resulted in a series of consumption notices that suggested people limit their consumption of walleye, northern pike, and lake trout from specific lakes in the region (NWT, 2016). Therefore, as part of a health communication component was added. This component was designed to assess participants risk perceptions and awareness of current consumption notices and health messages, to provide baseline data to evaluate the impact of consumption notices, to determine how health messages are currently developed, and to make recommendations to create more targeted communication strategies. Objectives: The research objectives of this thesis are to: 1) Assess participants’ risk perceptions and awareness of current consumption notices and health messages; 2) Provide baseline data to evaluate the impact of consumption notices and health messages over time; 3) Understand how consumption notices and health messages are currently developed and communicated to communities by the Government of the Northwest Territories; and 4) Make recommendations that aim to improve and create more effective communication strategies with focus in the Sahtú Region of the Northwest Territories based on knowledge synthesized from terminology workshop(s), surveys, and interviews. Methods: This project involves a Health Messages Survey, two terminology workshops, community interviews, and stakeholder interviews. Participants were invited to take part in a Health Messages Survey where they were asked questions about their perceptions of contaminants, whether they had heard or seen consumption notices, in addition to their preferences for future health messages based on trust and accessibility. Two terminology workshops were implemented in Délı̨nę, where key terms from the human biomonitoring project were identified, in order to translate or interpret into Slavey language. Twelve interviews were conducted with community members in Délı̨nę to document perceptions and stories regarding contaminants. Interviews also took place in Yellowknife with stakeholders from the Government of the Northwest Territories, the Federal Government, the Dene Nation, and the Giant Mine Oversight Board. Results: Based on the data collected by surveys (n=43), interviews (n=19) and two terminology workshops (n=27) during a two-year period from 2017-2018, we found that country foods are extremely valued in communities for many reasons. Each participant reported eating country foods and many preferred solely relying on country foods rather than: i) store-bought foods; or ii) a mix of store-bought foods and country foods. During community interviews, each participant expressed their gratitude for the country foods that they eat and wished that they could eat it more often. In the terminology workshops, the cultural importance of trapping, fishing, and hunting was discussed. Many participants had heard or seen messages that promoted the nutritional value of country foods and had also learned from their Elders and family members that these foods have been a source of sustenance for thousands of years. The majority of participants had heard or seen messages about fish with high levels of mercury in their country foods from radio, researcher or scientists, and friends and family. These participants also expressed their fear that contaminants may have impacted the country food that they most preferred to eat. The fear that participants expressed invoked change by the Government of the Northwest Territories (GNWT. The GNWT, the primary disseminator of health messages, has since changed their communication strategy from only consumption notices, to fact sheets and general fish consumption guidelines. Conclusion: This project demonstrated the importance of country food in the Sahtú region. In the Sahtú country foods connects people to the traditional and cultural practices that were passed on by parents and Elders which provides a sense of community and of belonging. This project provides baseline data based on surveys, interviews and terminology workshops for a clearer picture of how these participants perceive contaminants, where they currently get their health information, and who they would trust to receive this type of information. More research in the area of northern health and risk communication is necessary in order to compare results to other regions across northern Canada and to determine best practices. In order to create more culturally significant and relevant contaminant health messages, researchers and government must invest time into determining ways that will be well received and heard by the communities they are working with and be adaptable based on the region, a community. For instance, in the Sahtú region, this could include using methods such as the local radio, friends and relatives, researchers or other health workers (nurses, etc.) as the most trusted sources to receive this type of information. Another consideration is assuring that these messages are understood when disseminated. In communities of the Sahtú, this means that providing information about contaminants must be translated in local languages or having translators to disseminate results of research projects. We can use these results as a baseline to compare with other health communication projects happening in northern Canada and other circumpolar Indigenous communities and regions. This thesis has provided further context in disseminating contaminant and health and risk communication messaging and suggestions to improve communication strategies.