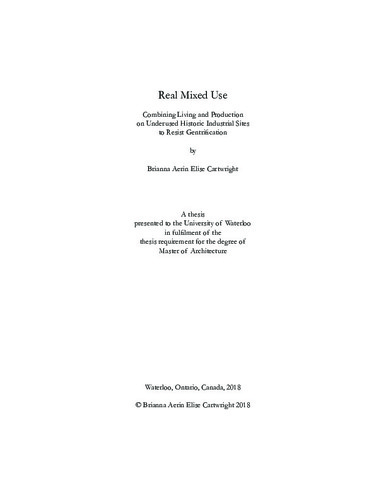 Changing economic conditions and production requirements have caused manufacturing and other secondary industries to move away from the urban core of mid-sized cities in Southern Ontario, such as London, Hamilton, and Windsor. As industry relocates to the periphery of these cities or out of the city altogether, it leaves behind pockets of vacant industrial land that are not being used to their full potential. The hollowing out of industrial areas in the urban core is especially interesting because it corresponds with a devaluation of the surrounding residential neighbourhoods, which have become in the past few decades the lowest income areas of these cities, as economic polarization increases. There is also declining population trend in these inner-city areas, in favour of new suburban residential development on the periphery. While these vacant areas often can be seen negatively because of the uncertainty and loss that they represent, eventually due to the seesaw of uneven development these sites reach a state of underdevelopment such that they become appealing and profitable to redevelop often resulting in gentrification and the displacement of the existing residents. This thesis aims to highlight these sites as spaces of possibility in a period of transition that have the propensity to be transformed through re-investment. This propensity will be guided by proposing an alternative to the seemingly inevitable gentrification that often occurs when devalued industrial sites are redeveloped. Typical redevelopment involves transitioning an area away from industrial uses in favour of purely residential and commercial uses. Instead, more intense mixing of traditionally conflicting uses is explored as a strategy for resisting gentrification when redeveloping. The goal is for this to be accomplished by confronting industry rather than erasing it in three main ways. 1. retaining the industrial nature of the site as much as possible and creating productive adjacencies between residential and industrial land rather than completely separating land uses, 2. remediating the land using phytotechnologies that allow people to engage with the process of remediation, and 3. supporting the existing working class population by focusing on the affordability of new residential units, and addressing the needs of the existing community rather than appealing only to market forces. This idea is explored through the design of a campus of live-work housing and facilities that support small scale food production in a historically industrial neighbourhood east of downtown London, Ontario.