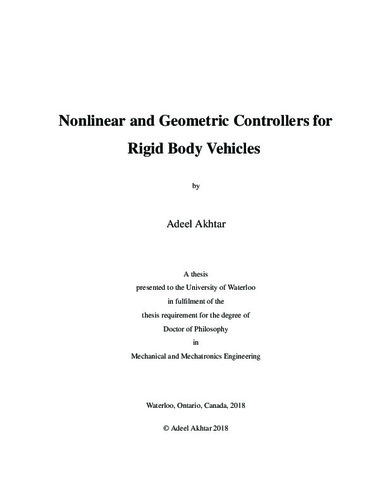 In this thesis we investigate the motion control problem for a class of vehicles C V , which includes satellites, quadrotors, underwater vehicles, and tailsitters. Given a globally represented model of C V , and a curve, the motion control problem entails following the curve using control inputs. In this thesis the motion control problem is viewed under two settings, 1) as a local path following problem, 2) as a geometric trajectory tracking problem. We provide solutions to both problems by designing controllers based on the concept of feedback linearization. In the local path following problem, the C V class of vehicles is represented by a local chart. The problem is solved in a monolithic control setting, and the path that needs to be followed is treated as a set to be stabilized. The nonlinear model under study is first dynamically extended and then converted into a fully linear form through a coordinate transformation and smooth feed- back. This approach achieves path invariance. We also design a fault tolerant local controller that ensure path following and path invariance in the presence of a one rotor failure for a quadrotor. The second major problem addressed is the geometric trajectory tracking problem, which is treated in an inner-outer loop setting. Specifically, we design a controller class for the attitude dy- namics of the C V class of vehicles. The novel notion of Lie algebra valued functions are defined on the Special Orthogonal group SO(3), which constitutes a family of functions. This family of functions induces a novel geometric controller class, which consists of almost globally stable and locally stable controllers. This class is designed using the idea of feedback linearization, and is proven to be asymptotically stable through a Lyapunov-like argument. This allows the system to perform multiple flips. We also design geometric controllers for the position loop, which are demonstrated to work with the attitude controller class through simulations with noisy sensor data.