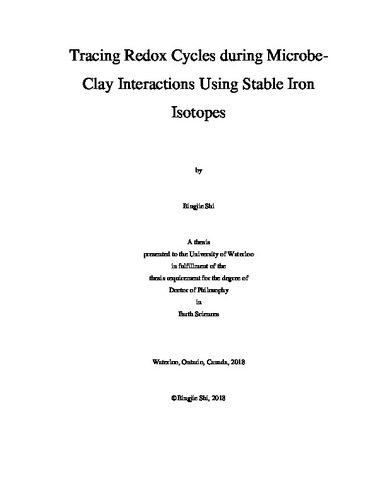 Iron redox cycling, especially Fe(III) reduction, is mostly driven by microbial activity in the shallow subsurface. A wide range of bacteria, archaea, and fungi reduce Fe(III) to acquire energy with soil organic compounds as the electron donors. Iron isotope signatures in ancient rocks (3.1-2.4 Ga) associated with dissimilatory Fe reduction (DIR) have been interpreted in terms of global changes in oceanic redox condition. Iron isotopes have also been used as indicators of redox processes involving Fe minerals such as Fe(III) (oxyhydr)oxides and pyrite. Clay minerals, however, contain approximately the same amount of Fe as all other Fe minerals combined, thereby playing a key role in Fe redox cycling. There have been numerous studies focusing on the mineralogical changes of clays during microbially, chemically, and electrochemically mediated redox cycles, and linking these changes to the bioavailability and reversibility of clay, including processes such as layer collapse, structural Fe migration, and dehydroxylation and water fixation. I used Fe isotopes, for the first time, to trace the redox cycling of clay minerals. Model nontronite minerals NAu-1 and NAu-2 were purified prior to the experiments to exclude impurities such as Fe oxides, kaolinite, and quartz. The purity of NAu-1 and NAu-2 was checked with X-ray diffraction (XRD) and scanning electron microscopy (SEM) coupled to energy dispersive spectroscopy (EDS), and transmission electron microscopy (TEM). In Chapter 2, I present Fe isotope fractionations measured during the microbial reduction, chemical reduction, and mixing experiment of nontronite NAu-1. Microbial (Shewanella oneidensis MR-1 and Geobacter sulfurreducens PCA) and chemical (dithionite) reduction of NAu-1 produced isotopically lighter aqueous Fe(II) during the early stage of the reduction, with maximum isotope fractionation factors between aqueous Fe(II) and structural Fe(III) from -1.2 to -0.8‰. Iron isotope fractionation was produced by the electron transfer coupled atom exchange (ETAE) between aqueous Fe(II) and structural Fe(III) via the adsorbed Fe(II) on edge sites. With microbial reduction proceeding to the extent at which structural Fe(II) fully covered the edge surface of NAu-1, isotope fractionation between aqueous Fe(II) and structural Fe(III) decreased to ~0‰ due to a lack of ETAE. Meanwhile, minor ETAE continued between edge-bound Fe(II) and structural Fe(III). The variation of Fe isotope fractionation was coupled to the reduction of bioavailable structural Fe(III), which represented ~10% of the total Fe in NAu-1, showing that Fe isotopes can be useful tracers of Fe redox changes in clay minerals. On the basis of the results of Chapter 2, in Chapter 3 I exposed NAu-1 and S. oneidensis MR-1 to three successive redox cycles to assess the redox reversibility of bioavailable Fe in NAu-1. Each redox cycle consisted of a long biotic reduction period (RP) and a short abiotic oxidation period (OP), between which the dissolved Fe(II) was removed to minimize the formation of Fe(III) (oxyhydr)oxides. Secondary mineral formation was not detected during the redox cycles. The initial fraction of bioavailable Fe in the unaltered NAu-1 was ~10% as proposed in Chapter 2. The remaining bioavailable Fe decreased from RP1 to RP3 due to the removal of the dissolved bioavailable Fe during the preceding RP. The dissolution of bioavailable Fe was primarily generated by the reduction of the smallest NAu-1 particles, while bioavailable Fe in the larger particles remained within the solid upon reduction. Due to the consumption of the small particles, bioavailable edge surface where ETAE takes place decreased with successive RPs, as implied by the decreasing Fe isotope fractionation from RP1 to RP3. By extrapolating the linear relationship between the extent of Fe(III) reduction and the fraction of dissolved Fe(II), I predict that ~4.2% of the total Fe in NAu-1 is redox reversible upon continued redox cycling, while ~5.8% of the total Fe is removed into solution. In Chapter 4 I examine the bioavailability of Fe in a tetrahedral Fe(III)-containing nontronite (NAu-2) via microbial (S. oneidensis MR-1) and chemical reduction (dithionite). The microbial reduction of NAu-2 exhibited three stages according to the change in isotope fractionation between different Fe pools [i.e., aqueous Fe(II), basal-sorbed Fe(II), edge-bound Fe, structural Fe]: 1) stage 1 was characterized by increasing isotope fractionation between aqueous Fe(II)/edge-bound Fe and structural Fe, indicating ETAE mainly occurred along the edge surface of NAu-1; 2) at medium to high reduction extent, stage 2 exhibited decreasing isotope fractionation between edge-bound Fe and structural Fe, while the fractionation between aqueous Fe(II)/basal-sorbed Fe(II) and structural Fe further increased, implying that the edge surface was blocked and prevented ETAE (that is, from then on ETAE mainly occurred on the basal plane surface); 3) Fe reduction reached its maximum extent during stage 3, while the isotope fractionation between aqueous Fe(II)/basal-sorbed Fe(II) and structural Fe decreased, indicating that the ETAE through the basal planes became inhibited. The observed iron isotope fractionations show that NAu-2 has increased exchangeable basal plane redox reactivity due to the presence of tetrahedral Fe(III). The reactive basal plane surface may be particularly important under acidic condition, because, under low pH, cation adsorption mainly takes place on the basal planes. Overall, my results show that Fe isotopes are a useful tool to study the Fe redox reversibility of clay minerals during redox cycles. However, on the basis of my results, I propose that microbial reduction of Fe(III) in clay may not have contributed to the isotope signatures recorded in BIFs during the late Archean. In addition, the presence of tetrahedral Fe may enhance the reactivity of clay minerals towards redox-active contaminants.