An Empirical Model of Area MT: Investigating the Link between Representation Properties and Function 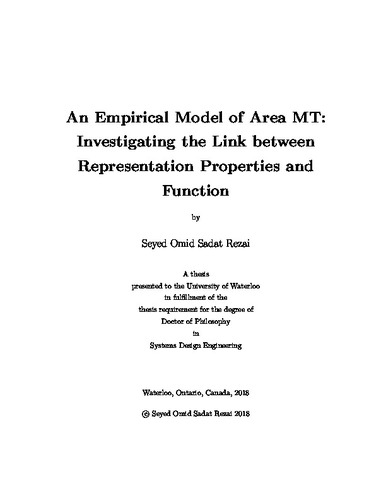 The middle temporal area (MT) is one of the visual areas of the primate brain where neurons have highly specialized representations of motion and binocular disparity. Other stimulus features such as contrast, size, and pattern can also modulate MT activity. Since MT has been studied intensively for decades, there is a rich literature on its response characteristics. Here, I present an empirical model that incorporates some of this literature into a statistical model of population response. Specifically, the parameters of the model are drawn from distributions that I have estimated from data in the electrophysiology literature. The model accepts arbitrary stereo video as input and uses computer-vision methods to calculate dense flow, disparity, and contrast fields. The activity is then predicted using a combination of tuning functions, which have previously been used to describe data in a variety of experiments. The empirical model approximates a number of MT phenomena more closely than other models as well as reproducing three phenomena not addressed with the past models. I present three applications of the model. First, I use it for examining the relationships between MT tuning features and behaviour in an ethologically relevant task. Second, I employ it to study the functional role of MT surrounds in motion-related tasks. Third, I use it to guide the internal activity of a deep convolutional network towards a more physiologically realistic representation.