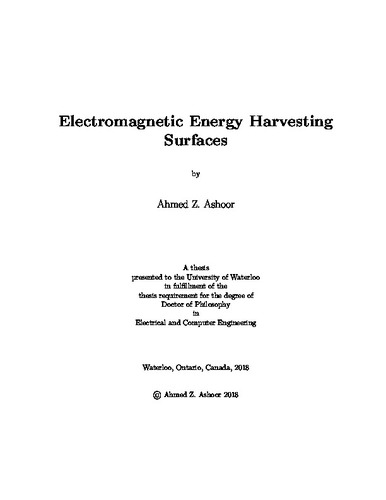 The concept of wireless power transfer (WPT) was successfully demonstrated in the early years of the 20th century. One promising application of using the WPT concept is the WPT transmission utilizing a large array of solar cells outside the earth's atmosphere to collect solar energy and then converts it to microwave power for transmission to earth using highly directive antennas. Space solar power SSP transmission concept may play an important role in the near future in harvesting clean and sustainable energy from space. The SSP concept calls for the large rectenna (i.e., antennas and rectifying circuitry) arrays farms that receive the microwave power that is transmitted from space and convert it into usable DC power. To obtain high power and high output voltage, the use of a large rectenna array is necessary, and hence the focus of this thesis is on improving the harvesting efficiency of rectenna systems. The two main figures of merit to evaluate a WPT rectenna system are the radiation to AC efficiency, and the radiation to DC efficiency. The latter combines the efficiencies of the electromagnetic energy collectors or antenna, and that of the rectifying circuitry. In the progress towards improving the efficiency of a rectenna array system, efforts were heavily focused on improving the AC to DC conversion efficiencies. However, in most previous works, efforts to improve the efficiency of the antennas were not pursued. The majority of rectennas were in fact designed using conventional antennas because of their wide use in modern communications technologies but not for their particular ability or suitability to efficiently harvest electromagnetic radiation. The first part of this thesis introduces, for the first time, the use of dielectric resonator antenna (DRA) in an array form as an energy harvester. A single DRA and a 1x3 array were used to build foundation profiles for using DRAs in an array form as an energy harvester. The proposed structures were designed and fabricated to maximize energy reception around 5.5 GHz. The size of the ground plane and coupling between dielectric resonator (DR) elements in an array were studied with special focus on the overall efficiency of the antenna structure for different incident polarizations. A 5x5 array was built and tested numerically and experimentally. Measurements showed that energy absorption efficiency as high as 67% can be achieved using an array of DRAs. Then an extension of this finding was carried out considering the DRA's fabrication challenges. A complementary DRAs structure consisting of DR blocks backed by cut grounds is proposed. It was shown through numerical simulations that the complementary DR blocks resonator can efficiently deliver the incident power carried by an electromagnetic wave to a load with an efficiency of 80%. The concept of using an electromagnetic energy harvesting surface (EHS) structure is introduced in the second part of this thesis. A design of an electromagnetic EHS inspired by an array of printed metallic dipolar elements is introduced. The unit cell of the EHS is based on two printed asymmetric off-center fed dipoles. As a proof of concept, a finite array of 9x3 unit cells was analyzed numerically and experimentally to work at 3 GHz. The array was first analyzed for maximizing radiation to AC absorption where each dipole was terminated by a resistor across its gap. An overall radiation to DC harvesting efficiency of 76% was obtained experimentally. The third part of this dissertation presents a design for a multi-polarization electromagnetic EHS inspired by a multi-layer unit cell of printed asymmetrical metallic dipolar elements. The harvesting array features two layers that collectively capture the incident energy from various incident angles. The harvester was first analyzed for maximizing the radiation to AC absorption at 3 GHz where each dipole was terminated by a resistor across its energy-collecting gap. As a proof of concept, a multi-layer array consisting of 3x3 asymmetrical dipolar elements of the multi-layer unit cell was fabricated and measured experimentally. The experimental results yielded an overall radiation to DC harvesting efficiency of 70%for multiple incident polarizations. Next, an EHS is introduced for receiving multiple polarizations while using only one metallization layer. The EHS unit cell is based on two cross-dipoles that enable capturing the energy from various angles of illuminations at an operating frequency of 3 GHz. The simulation results yielded a radiation to AC efficiency of 94% at multiple angles of polarization. For validation, a finite array of 7x7 unit cells was fabricated and tested experimentally. The experimental results of the EHS energy harvesting array show an overall radiation to DC harvesting efficiency of 74% at various polarization angles. A critical design feature of the proposed cross-dipole EHS array is that it allows direct matching to a rectifying circuitry at the dipoles plane. The thesis concludes by introducing an efficient dual-band EHS array using two stacked-layer of cross-dipole elements for efficient harvesting at two frequency bands for multiple polarizations. The proposed EHS array introduces the concept of stacked surfaces that can be directly integrated with the rectification circuitry. The multilayer EHS array allows direct matching to a rectifying circuitry such that DC power is collected at the elements' plane for each layer. The total achieved harvested DC power is the collective contribution of the rectified DC power from the EHS's layers. A finite multi-layer array of 7x7 unit cells was fabricated and tested experimentally. The experimental results of the dual-band EHS energy harvesting array show an overall radiation to DC harvesting efficiencies of 77% and 70%, respectively, at various polarization angles at the desired operating frequencies of 2.7 GHz and 3.4 GHz.