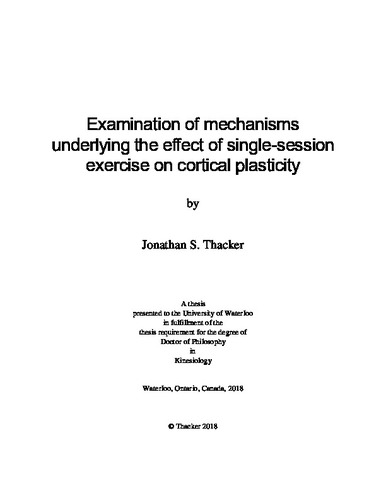 Individuals who routinely participate in physical activity are the beneficiaries of a wide array of health benefits. As well, recent observations in humans have identified that even a single session of aerobic exercise can enhance the receptivity of the primary motor cortex (M1) to within-session motor skill training, a phenomenon referred to as “priming”. However, the biochemical mechanisms that account for exercise-induced priming of M1 remain relatively unexplored. Thus, the current thesis presents 4 studies that aimed to uncover the biochemical signature responsible for exercise-induced priming of M1 following a single bout of aerobic exercise. Given the notion that a single exercise exposure primes M1 for learning, it is likely this change would manifest on a molecular level and mirror adaptations stereotypically observed during early synaptic plasticity. In the first study, no observable differences in plasticity-related protein expression were found in the M1 of male, Sprague-Dawley rats following either acclimatization, or a graded exercise test to exhaustion. These data suggest treadmill acclimatization, or exhaustive exercise are not likely, by themselves, to evoke the required sort of change within M1. Consequently, a more likely candidate for exercise-induced priming was pursued; that is, post-translational modification of the already established proteome. In study 2, significant increases of both AMPA (GluA1, 2) and NMDA (GluN2A, B) receptor subunit phosphorylation were observed only after a single session of moderate exercise. Phosphorylation changes of the observed direction and magnitude have previously indicated alterations in the localization of these receptors at the cellular surface, however, whether these changes are confined to synaptic densities remains uncertain. Presently, few techniques exist with the specificity and precision required to adequately assess the synaptic surface fraction. As a result, in study 3, we developed a novel approach to enrich synaptic surface proteins by combining two well-established techniques (biotinylation + synaptoneurosome isolation). Using Western blot analysis, we confirmed that our biotinylated-synaptoneurosome fraction showed strong agreement with the presumptive presence of synaptic membrane-bound proteins, while excluding negative-control proteins. Moreover, we displayed the sensitivity of this approach to detect synaptic receptor trafficking events by chemically inducing long-term potentiation in M1 slices. Following the development of this technique, we redirected our efforts to explore the priming effects within M1. Specifically, we assessed the efficacy of priming M1 using two molecules (Corticosterone + BDNF) previously demonstrated to be released during and after a single session of exercise. We incubated M1 slices either in combination, or alone, with each of the two hormones and found significant changes in synaptic surface expression of either NMDA, or AMPA receptor subunits. In addition, we observed large increases in AMPA receptor subunit phosphorylation and total AMPA receptor presence within synaptic fractions, suggesting priming of M1 may be reflected as the accumulation of receptors within synapses, which would serve to provide a receptor pool at the synaptic density ready for insertion. In combination, the 4 studies provide the first evidence for a mechanism that may account for exercise-induced priming following a single session of moderate aerobic exercise.