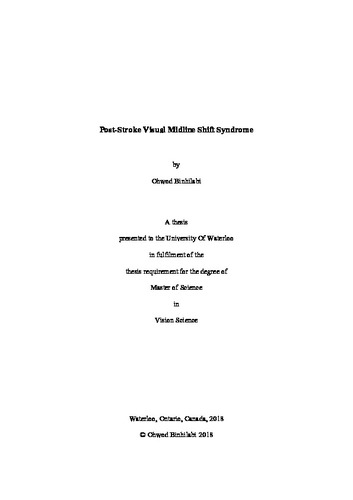 Abstract Introduction The definition of an individual’s visual midline is the point which the individual perceives as being straight-ahead or “in front of their nose”. One of the perceptual consequences of a stroke for some individuals is a shift in their perceived midline. It can be shifted vertically or laterally so that a target will be perceived as straight-ahead when, for example, it is presented in front of the left eye. Little is understood of the epidemiology or prognosis of VMSS. The assessment is also not well standardised. It is currently assessed manually with a hand-held ‘wand’ to determine the individual’s subjective midline position. There is no commonly accepted size and distance of the target, speed of the movement, or control of the background. The goals of the first study were to standardize the parameters of a device using healthy participants with no history of stroke and no significant eye or systemic disorders that might influence the position of the midline. This also provided normal data against which the midline of patients can be compared. The goal of the second study was to use the device to determine the percentage of stroke survivors who experience VMSS, and whether there are associations between the perceived midline and the type and side of the stroke and other measures such as handedness, neglect, open-looped pointing and the subjective straight-ahead position. A comparison group of people without stroke, but who may have other ocular or systemic disease were included. Methods For the first study, twenty-four healthy control participants in two age groups (20-35 and ≥65 years) without stroke were recruited. In the first session, the perceived horizontal midline was measured with the midline shift gauge for 3 target sizes and 2 speeds at a 50 cms distance. In the second session, the perceived vertical and horizontal midline was measured for 3 distances with a target size and speed determined from session 1. For the second study, a history was taken including ocular, medical history, medications, handedness and stroke history. Testing included ocular dominance, confrontation fields, cognitive impairment testing with the MoCA test, a measure of the subjective straight-ahead position, visual open loop testing, neglect testing with the Bell cancellation and line bisection tests. VMSS was measured in two ways, the usual way with a hand-held “wand” and then with the VMSS gauge. Results In the first study, session 1, repeated measures ANOVA for the means and standard deviations showed no main effect of speed, target size or target direction and no interaction (p>0.05) for the perceived horizontal midline position or the variability between participants (p>0.05) and so one speed and target size was chosen for the second session. For the second session, repeated measures ANOVA for the horizontal midline position for age and distance (2x age, 3x distance) showed no significant effect of age and no interaction (p>0.05), but there was an effect of distance for the variability (standard deviations). For the vertical midline, there was an effect of both age and distance. Handedness had no significant impact on the midline position (2 sample t-test, p>0.05) for the older age group (all younger participants were right handed). Individual analysis of the midline position showed that all participants except one had no perceived mid-line shift. In the second study, fourteen participants were recruited (nine non-stroke participants who ranged between 23-80 years old and five post-stroke participants, age ranging between 48-78 years old). Three (60%) post-stroke participants and five (55%) of the non-stroke participants had a perceived midline shift. Perceived midline shifts were detected with the gauge when there was no midline shift detected with the clinical wand procedure and vice versa. In some cases, a different midline shift was found at different distances from the participant. There was no obvious association between the direction of the midline shift and factors such as handedness, ocular dominance, subjective straight-ahead, open-loop pointing or intra-ocular visual acuity difference. Conclusion The first study shows that the measurement of midline in control participants is tolerant of differences of target size, speed and direction, but differences of age and distance were found. Normal data are presented which can be used to quantify the midline shift in future cross-sectional and longitudinal studies of post-stroke participants. The second study shows that there is no association between the variables measured, so no clear predictor of midline shift was observed. The comparison group who had other ocular and systematic morbidities also showed midline shifts. Therefore, visual midline shift is not specific to stroke or only resulting from stroke. The variability in results at different distances from the patient indicate that midline shifts should be measured at several distances in the clinical assessment of VMSS. The results also suggest that visual midline shift should be considered as a risk factor for falls in both stroke and non-stroke populations.