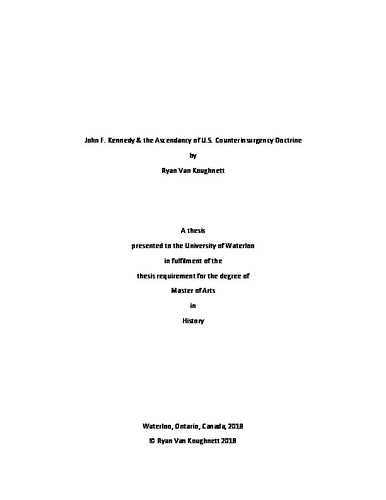 The formation of a coherent counterinsurgency policy in the United States is often attributed to the administration of President John F. Kennedy. Indeed, through his own personal fascination and promotion of the subject, Kennedy infused funding and expertise into a steadily expanding counterinsurgency apparatus. However, American counterinsurgency doctrine was implanted deeply within military and intelligence institutions and government bureaucracy long before the Camelot era. American conquest by counterinsurgency has a long legacy. The Founding Fathers for Kennedy (to whom this tradition belongs) were Andrew Jackson, William Sherman, William McKinley, Teddy Roosevelt and Woodrow Wilson. As this study argues, periods of American expansion have always been based on principles of anti-civilian warfare. The history of the United States is one of expansion and primitive accumulation - a process facilitated by methods promoted by presidents spanning the last two centuries.