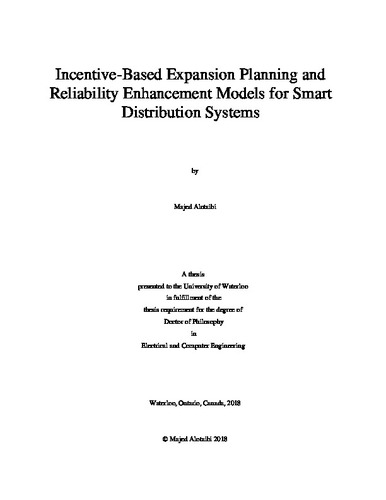 Due to the rapid progress toward the implementation of smart grid technologies, electric power distribution systems are undergoing profound structural and operational changes. Climate concerns, a reduction in dependency on fossil fuel as a primary generation source, and the enhancement of existing networks constitute the key factors in the shift toward smart grid application, a shift that has, in fact, already led power industry stakeholders to promote more efficient network technologies and regulation. The results of these advances are encouraging with regard to the deployment and integration of small-scale power generation units, known as distributed generation units (DGs), within distribution networks. DGs are capable of contributing to the powering of the grid from distribution or even sub-distribution systems, providing both a positive effect on network performance and the least adverse impact on the environment. Smart grid deployment has also facilitated the integration of a variety of investor assets into power distribution systems, with a consequent necessity for positive and active interaction between those investors and local distribution companies (LDCs). This thesis proposes a novel incentive-based distribution system planning (IDSP) model that enables an LDC and DG investors to work collaboratively for their mutual benefit. Using the proposed model, the LDC would establish a bus-wise incentive program (BWIP) based on long-term contracts, which would encourage DG investors to integrate their projects at the specific system buses that would benefit both parties. The model guarantees that the LDC will incur minimum expansion and operation costs while concurrently ensuring the feasibility of DG investors’ projects. The proposed model also provides the LDC with the opportunity to identify the least-cost solution among a combination of the proposed BWIP and traditional expansion options (i.e., upgrading or constructing new substations, upgrading or constructing new lines, and/or reconfiguring the system). In this way, the model facilitates the effective coordination of future LDC expansion projects with DG investors. To derive appropriate incentives for each project, the model enforces a number of economic metrics, including the internal rate of return, the profit-investment ratio, and the discounted payback period. All investment plans committed to by the LDC and the DG investors for the full extent of the planning period are then coordinated accordingly. The intermittent nature of both system demand and wind- and PV-based DG output power is handled probabilistically, and a number of DG technologies are taken into account. Several linearization approaches are applied in order to convert the proposed model into a mixed integer linear programming (MILP) model, which is solved using a CPLEX solver. Reliability of service in a deregulated power environment is considered a major factor in the evaluation of the performance of service providers by consumers and system regulators. Adhering to imposed obligations related to the enhancement of overall system reliability places a substantial burden on the planning engineer with respect to investigating multiple alternatives and evaluating each option from both a technical and an economical perspective. This thesis also proposes a value-based reinforcement planning model for improving system reliability while maintaining reliability metrics within allowable limits. The optimal allocation of tie lines and normally open switches is determined by this planning model, along with required capacity upgrades for substations and lines. Two hierarchical levels for system operation under contingencies, namely, the restoration process and islanding-based modes, are applied in the model. A probabilistic analytical model is proposed for computing distribution system reliability indices based on consideration of these two hierarchical operating levels and taking into account variations in system demand, DG output power, and the uncertainty associated with system components. Due to the nature and complexity of these kinds of problems, a metaheuristic technique based on a genetic algorithm (GA) is implemented for solving this model. This thesis also proposes a new iterative planning model for smart distribution systems in which system reliability is considered a primary component in the setting of incentive prices for DG owners. A new concept, called generation sufficiency for dynamic virtual zones, is introduced in the model as a means of enhancing reliability in areas that are subject to reliability issues. To avoid any contravention of operational security boundaries, DG capacity is represented by two components: normal DG operating capacity and reserve DG capacity. The MILP planning model is constructed in a GAMS environment and solved with the use of a CPLEX solver.