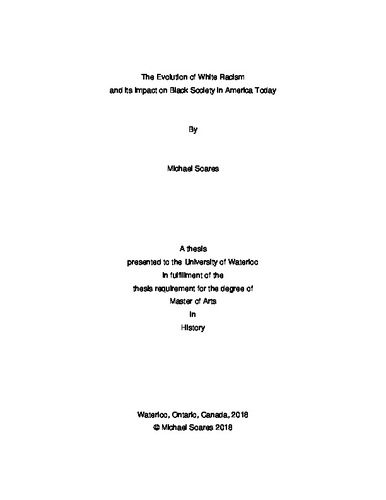 This thesis examines the historical evolution of racial hierarchies and white racism in American society, and in particular how these ideological frameworks have impacted Black American society. By utilizing a case study approach, in order to fully identify the pervasive nature of white racial and cultural narratives and the ways they have denied Black progress and freedom, the goal is to outline how systemic incorporations of racialized stereotypes within political rhetoric and popular culture have worked to reinforce white racial hierarchies and white cultural paradigms. The three periods examined in this case study are as follows: the Post-Civil War American South, 1960's Civil Rights Era and the modern Hip Hop Generation. Misrepresentations within music, media and sports all too often resemble neo-colonial, paternalistic and racialized myths of the past. While politicians, particularly conservatives, have consistently used racialized messages to fan white fears and gain voter support with reactionary "law and order" rhetoric and by blaming minorities for American socio-economic problems. The criminalization of Blackness in American society is based on white fears, not relative crime rates. Whites, since the collapse of Reconstruction policies in the South, attempted to force Blacks back onto the plantations, railroads and iron mines of the South. Black criminality became the excuse for reinforcing racial hierarchy in American society, convict leasing replaced slavery in the South. Conservative politicians spewed forth racialized rhetoric to disenfranchise Black voters in the South, while lynching and race riots acted as violent methods to reinforce white domination and white racialized notions of Black inferiority. By the 1960s violence became a tool of the agents of the FBI to repress Black Power groups and their attempts to challenge white racial hierarchies in America. However, by the late 60s racism and outright violence became unpopular and new more subtle, more systemic forms of reinforcing racial caste systems and white supremacism in American society were needed. The impacts of deindustrialization, white flight, gerrymandering, rezoning, political marginalization and the elimination of an entire generation of Black leaders needs to be discussed for someone to fully recognize the legacy of white racism. Politicians and popular culture today have come to support racial hierarchies either intentionally or unintentionally by consistently over representing Black criminality and pushing racialized images, that in many ways came eerily similar to Jim Crow representations of Blackness. From Blaxploitation Films to Gangster Rap and Hood Films, this thesis examines how white dominant cultural representations of Black Criminality have become embedded within American popular culture and politics, and how these racialized images and narratives have conditioned American society to accept white supremacist notions of race and crime.