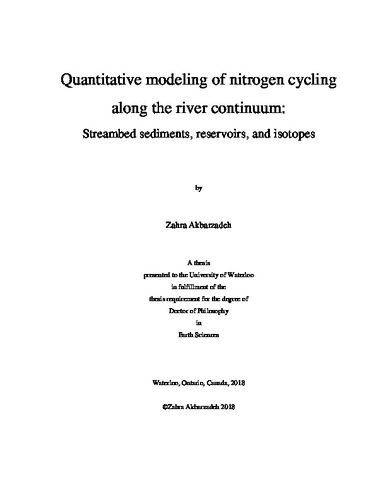 The vast release of anthropogenically produced reactive nitrogen (N) into the environment, by agricultural activities, energy production and municipal wastewater, has led to a variety of consequences for atmospheric, terrestrial, and aquatic ecosystems and human health. In particular, elevated loadings of N have been documented in many rivers worldwide. However, the fate of this reactive N in the different biogeochemical compartments of the river system is yet to be fully investigated. Elevated concentrations of N in the river system influence the interactions at the sediment-water interface (SWI), which can significantly impact the water quality and primary productivity in the river system and receiving water bodies. In addition, humans have impacted the N cycling in rivers by dam construction. The damming of rivers represents one of the most profound human interventions in the freshwater cycle, with substantial implications for water security, energy production, biodiversity and aquatic ecosystem functioning. River damming, on the rise during the last 60 years, shows no sign of abating in the coming decades. However, since the beginning of the 20th century, the geographical locations of the new dams have increasingly spread to the rapidly developing parts of the world, in particular, Southeast Asia and South America. This thesis aims to simulate the biogeochemical cycling of N along the river continuum across different scales so as to quantitatively predict the modifications caused by anthropogenic activities. At the local to regional scale, the role of bottom sediments in the nitrite budget of a European river system, impacted by urban and agricultural activities, is investigated using an early diagenesis model. At the global scale, the changes in the past, present and future riverine fluxes of N due to river damming are estimated and analyzed. To describe the fate of reactive N in streambed sediments, a comprehensive reactive-transport model is developed. The model explicitly represents the production and consumption of nitrite, a reactive intermediate in the N cycle, through nitrification, denitrification, dissimilatory nitrate reduction to ammonium (DNRA) and anammox. Although nitrite is typically considered to be a short-lived compound, elevated concentrations of it have been observed at relatively high concentrations in freshwaters aquatic systems, raising concerns due to its toxicity for humans, animals and plants. Among other impacted rivers, nitrite accumulation has been observed in the Seine, a N polluted river with high agricultural and urban inputs in France, raising questions about its sources and fate. The early diagenetic model is employed to assess the role of sediments in releasing nitrite to the overlying water or removing it at two different sampling locations and two different times of the year. Four datasets collected in summer and fall, upstream and downstream of the largest wastewater treatment plant (WWTP) serving the Paris conurbation area, are used to test the model. The datasets include pore water profiles plus benthic exchange fluxes of nitrate, nitrite and ammonium at the SWI, measured during core incubation experiments. The model results emphasize the major role of the WWTP for the nitrite budget in river, not only due to the direct release of nitrite through effluent discharges, but also by supplying the high loads of labile organic carbon (C) that enhance heterotrophic activity in the sediments. In the next step, the reactive-transport model is expanded by incorporating the N isotopic compositions of nitrate, nitrite, ammonium and organic N, and accounting for the isotopic fractionations along the N transformation pathways. The model is used to simulate the temporal variation in isotopic composition of N species under non-steady state conditions at the SWI during incubation experiments. A sensitivity analysis is performed, by applying different scenarios, to provide insight into the main controls on the nitrite isotopic compositions at the SWI. The results highlight the major role of oxygen on the variations of the isotopic values of N species and illustrate the effects of different N transformations on the isotopic compositions of N species at the SWI. The model will be applied in upcoming sediment incubation experiments with Seine River sediments that will be carried out by our French colleagues. Finally, I assess the impacts of damming on the global riverine nitrogen fluxes by estimating N burial in sediments of dam reservoirs and gaseous emissions through denitrification. Moreover, I estimate global N fixation in reservoirs as a source of new N to these systems. A process-based N mass balance model is developed to represent the biogeochemical cycling of N in reservoirs. Using Monte Carlo simulations, the model is scaled up to generate a virtual database of dams. From this dataset, I derive two global relationships between N elimination in reservoirs, by either denitrification or burial, and the hydraulic residence time. These relationships are then combined with N loads to rivers obtained from the Global-NEWS model and N fixation fluxes calculated for dams included in databases for existing and future reservoirs. The results demonstrate that, globally, denitrification and burial in dam reservoirs exceed N fixation, and dam reservoirs therefore act as a sink of N worldwide. I estimate that denitrification and burial in reservoirs eliminated 7% of N loading to the global river network in the year 2000. This percentage is predicted to double by 2030, mainly because of the current boom in dam building. This thesis provides new tools to make more detailed assessments of the role of bottom sediments in the nitrite budget of rivers and give insights on the processes that affect the direction and magnitude of the nitrite fluxes at the SWI. Additionally, I present the first estimation of global N fixation in dam reservoirs. By coupling my results to those of the earlier work on phosphorus (P), I further show that dams increase the N:P ratio of riverine discharge, thereby reducing the magnitude of N limitation for primary production in receiving lentic and coastal marine environments. This information should be taken into consideration when developing strategies to lessen the impacts of cultural eutrophication.