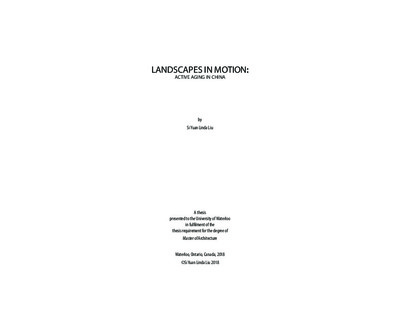 Aging in China does not mean slowing down or losing flexibility. On the contrary, aging in China is about regaining youth and becoming a younger replica of oneself. Seniors are becoming more mobile and agile through various activities. The practice of calligraphy for many seniors has become a daily exercise routine motivated by improvement of one’s health rather than the traditional desire for creativity or communication. Calligraphy is ultimately an extension of the calligrapher itself. The art of calligraphy writing appears stationary, but the acts of writing exhibit a vast array of internal dynamics and motion that channels energy throughout the body. This dual combination of seemingly opposite forces creates a complementary and interconnected formation creating a natural unity. The composition of strokes, rhythm of movement, and release and withholding of vital energy creates the poetic choreography of calligraphy. The practice of calligraphy is an activity that not only expresses artistic expression yet also cultivates mental dexterity and spiritual tranquility. In the fifth century, poet Tao Yuanming initiated the appreciation of pastoral lifestyle as the poetic retreat from the chaotic society. The Daoist idea of natural beauty and search for immorality has heavily influenced traditional landscape painting as a means of expressing the ideal dwelling in the spiritual world of literati. The landscape painting stimulates the viewer’s imagination to a surreal level creating a feeling of wonderment rather than viewing from a still and distant point. The shifted perspectives in the painting are used to focus or withhold various elements upon different scales in the landscape. The control of external versus internal views depicts a spatial journey in landscape painting that can be discovered within a Chinese garden that is suitable for dwelling and exploring. This thesis explores the changing demographics of Shanghai and shift in populous and landscape where the concepts of calligraphy and Chinese garden are used to create an ideal retreat for seniors in the urban environment.