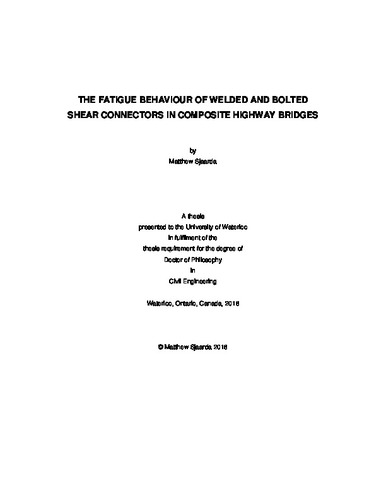 At present, many Canadian bridges are overdue for rehabilitation or replacement. In the case of steel-concrete composite bridges, the shear connection between the concrete deck and the steel girders is a vital element of the bridge system, and has significant impacts on construction time, cost, structural integrity, and durability. The general performance of the shear connectors in these bridges is becoming an increasingly important issue, as existing bridges are used past their intended design lives, and new bridges are being designed with accelerated construction and longer service lives in mind. Welded shear studs are the standard method of shear connection in composite bridge construction, either cast-in-place or concentrated in grouted “shear pockets” in the case of steel-precast applications. The primary disadvantage of using welded shear studs in structures subjected to repeated loading is that they are believed to perform poorly from a fatigue perspective. As a result, design standards in North America require most bridges to have more than double the number of studs needed for ultimate strength purposes. This leads to construction challenges including arduous deck reinforcement placing, and it reduces the economy gained through steel-precast construction by requiring excessive numbers of shear pockets. It is possible that an enhanced understanding of the performance of welded shear studs in composite beams, including system effects, may allow for relaxed design provisions. High strength bolt shear connectors may be a viable alternative to shear studs in some cases, providing greater fatigue resistance due to the absence of welds, and having a higher material strength than conventional welded studs. The work presented herein is aimed at increasing the state-of-understanding of the fatigue behaviour and reliability of welded shear studs in both cast-in-place and precast concrete composite bridge applications, while also presenting the benefits and drawbacks of two alternative high strength bolt shear connection concepts. A laboratory research program carried out at the University of Waterloo featured the testing of eighteen large-scale beam specimens over a period of two years. In addition to the laboratory work completed by the research team, the author used finite element and reliability analysis methods to augment the test results and extend their applicability to full-scale medium span highway bridges. Over sixty stud fatigue failures and four bolt fatigue failures were observed over the course of this study, greatly adding to a dearth of existing test results, and allowing the construction of a statistically meaningful fatigue design curve of the stud detail from beam tests for the first time. System effects of multiple stud failures were studied in a finite element model of a typical highway bridge girder and revealed that the current design rules are overly conservative for all bridge classes in the Canadian Highway Bridge Design Code, and for all bridge configurations except for short spans. The results support the proposed new fatigue category dedicated to welded shear studs, recognizing the unique redundant and uninspectable nature of the detail, and suggest a fatigue endurance limit of 36 MPa (one and a half times the current limit). It is proposed that the embedded high strength bolt detail be viewed as a viable alternative to studs, given greatly increased fatigue performance and exceptional ease of deconstruction. The benefits of such a connection would be particularly useful in combination with precast deck panels.