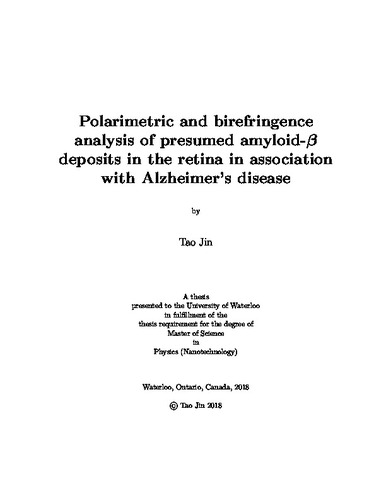 Alzheimer's disease is a neurodegenerative disease which leads to symptoms such as loss of memory and other neurological dysfunctions, ultimately leading to death. Two key hallmarks of Alzheimer's disease are abnormally folded Amyloid-beta and tau proteins in the brain. Currently, the diagnosis of Alzheimer's disease is only confirmed by finding these hallmarks in the brain after death. Two of the methods that reach a probable diagnosis of Alzheimer's disease are positron emission tomography and cerebral spinal fluid analyses. However, both methods are invasive as positron emission tomography uses radiation and dyes, and examination of cerebral spinal fluid requires invasive extraction from the patients' body. Fortunately, amyloid deposits, which presumed to contain Amyloid-beta, have been found in the retina. In vivo imaging of amyloid deposits using curcumin staining has been shown in AD patients receiving oral curcumin for several days. Since the retina can be directly imaged through the pupil and polarimetry does not require a dye, a noninvasive method of diagnosis could combine polarimetry and a retinal imaging device. In this thesis, one of the key polarimetric properties of amyloid deposits, linear birefringence, was studied. The linear birefringence was computed by using the combination of Mueller Matrix Polarimetry for linear retardance and Confocal Laser Scanning Microscopy for thickness. These measurements were conducted in retinal deposits as well as a matched number of pure Amyloid-beta deposits with similar thickness grown on glass slides. Between the two types of deposits, there was no significant difference shown in linear birefringence fitted to the linear regions of the retardance versus thickness plot. Both types of amyloid deposits show similar trends at high thickness where linear retardance plateaus and then decreases with increasing thickness, giving low birefringence value at high thickness. This result suggests that the retinal deposits are composed primarily of amyloid-beta and that there is only short range order of the fibrils in the retinal deposits. The birefringence of retinal deposits is also higher than the background retinal nerve fiber layer and the senile plaques in the brain measured to date. These senile plaques are higher in thickness than the retinal deposits and have birefringence values similar to the low birefringence values of pure Amyloid-beta deposits of high thickness. The high birefringence of the retinal deposits demonstrates the feasibility of in vivo imaging of retinal amyloid deposits using a patented label free method. In order to calculate the retardance used here to infer the birefringence measurements and in future clinical applications, the Mueller matrix computed from the acquired images needs to be decomposed. However, for a large image, the decomposition may take a long time. Hence, an accelerated implementation of the polar decomposition was developed and used in this thesis. By implementing the accelerated decomposition on a graphic processing unit, the speed of decomposition is more than 15 times faster than the original calculation before acceleration. For computing the birefringence of amyloid deposits, image segmentation was conducted to separate them from the surrounding retina. Automatic segmentation methods including Otsu's method, K-means clustering, Gaussian mixture model, and Markov random field were tested. Gaussian mixture model and Markov random field showed the highest success rate while both Otsu's method and K-means clustering performed poorly. It is thus recommended to use either Gaussian mixture model (faster) or Markov random field (slightly more accurate) to segment images of amyloid deposits. The results reported in this thesis show polarization properties of amyloid deposits, such as strong birefringence values, which are useful in identifying these deposits in the retina. Coupled with fast decomposition and automatic segmentation of the deposits in the image, an efficient, noninvasive diagnostic method may be established in living eyes in the future.

Tao Jin (2018). Polarimetric and birefringence analysis of presumed amyloid-beta deposits in the retina in association with Alzheimer's disease. UWSpace. http://hdl.handle.net/10012/13938