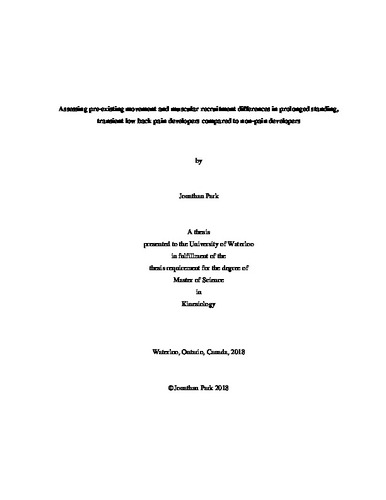 Epidemiological studies have reported occupational prolonged standing to be associated with low back pain (LBP). Studies that have conducted simulations of prolonged standing work in healthy individuals have demonstrated a proportion of them will develop transient LBP (termed pain developers or PDs), while others will not (termed non-pain developers or non-PDs). Investigations into differences between pain groups using low-demand tasks have predominantly reported neuromuscular differences involving the hip musculature and have shown capacity to distinguish pain groups. However, misclassification persists. There is little published data on pain groups in response to higher-demand challenges, which may elicit previously unseen or larger differences. Thus, the purpose of this study was to examine movement behavior and muscle recruitment patterns in healthy individuals that are non-PDs or PDs during a variety of tasks with increased functional demand and variety. It was hypothesized that the higher demand challenges will elicit previously unseen or enhanced differences in movement behavior and muscle recruitment in PDs relative to non-PDs. Healthy university students were recruited to participate in two sessions. The first session involved participants performing a prolonged standing work simulation to determine their pain status. The second session involved participants performing a movement screening protocol involving low and high demand variations of the following tasks: symmetric trunk flexion-extension, symmetric floor-to-knuckle lift, modified star excursion balance test, active hip abduction, and reverse side bridge. Participants were outfitted with 3D motion capture markers and surface electromyography prior to task performance. Depending on the task, the kinematic data of the trunk and lower limbs were characterized into the following dependent variables: thorax segment angular velocity, peak lumbar spine flexion angle, frontal plane knee excursion, limb length normalized reach distances, and movement arc length. Depending on the task, surface electromyography of the external obliques, lumbar erector spine, gluteus medius, and gluteus maximus muscles were processed into the following dependent variables: phase lags at maximum correlation between muscle pairs and regression slope of median power frequencies for assessment of muscle fatigue. A total of 39 participants were recruited and categorized, resulting in a subtotal of 22 non-PDs (12 females) and 17 PDs (8 females). Mixed-design analysis of variance analyses revealed no statistically significant main or interaction effects between pain status groups in most of the aforementioned kinematic and surface electromyography dependent variables. Interestingly, performance during the active hip abduction (AHA) revealed a pain status and task difficulty interaction effect (F(1,35) = 5.22, p < 0.05), with PDs exhibiting larger angular displacement arc length during AHA performance with an external weight relative to no external weight; not observed in non-PDs. The results of this investigation showed that although task demands demonstrated changes in various kinematic and muscle activation patterns across participants, it did not always coincide with an individual’s pain status. Nonetheless, a significant finding to emerge from this study is the potential interaction an external weight has on pain status with their performance during the AHA. Taken together, these results suggest that there is minimal evidence for tasks with increased functional demand and variety to elicit unseen or larger aberrant movement behavior and muscle activation patterns in PDs relative to non-PDs.