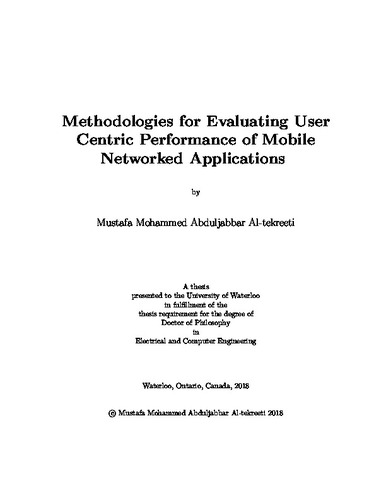 Performance is an important attribute of mobile software applications, having a direct impact on end-user's experience. One of the obstacles that make software performance testing difficult to pursue is the lack of performance requirements that complicates the process of verifying the correctness of the test case output. Moreover, compared to other platforms, mobile applications' quality assurance is more challenging, since their functionality is affected by the surrounding environment. In this work, we propose methodologies and frameworks to evaluate the impact of interaction of the quality of the wireless network connection and application configurations on performance behaviour and performance robustness of a mobile networked application as perceived by the end user. We follow a model-based approach. The thesis starts by defining the system model of software applications that we target, the network stack that the application is assumed to use to provide the service to the end user, and the metric used to capture the quality of the provided network service. Then, an analytical performance model that captures the application-network interactions is developed using the Markovian framework. To model realistic interactions with the network, the performance model is developed and solved using supplementary variable technique (SVT). The model is intensively verified with simulation. Furthermore, two input network models are analytically developed. In both models, the mobile application is assumed to have a wireless network access through a WiFi access point that implements IEEE 802.11 protocol. In the first model, data transfer is achieved using user datagram protocol (UDP), while in the second, data transfer is accomplished using transmission control protocol (TCP). For the TCP model, two scenarios are considered. In the first scenario, an application data unit (APDU) is assumed to fit in one TCP packet, while in the second scenario, an APDU is assumed to fit in multiple TCP packets. All models are verified using the well-known NS2 network simulator. Third, we propose a model based test generation methodology to evaluate the impact of the interaction of the environment, the wireless network, and the application configurations on the performance of a mobile networked application. The methodology requires four artefacts as inputs, namely, a behaviour model of the software under test, a network model, a test coverage criterion, and a set of desired performance levels. The methodology consists of three steps: performance model development, test generation, and estimation of test execution parameters. To evaluate the end-user quality of experience, test generation is formulated as an inversion problem and solved as an optimization problem. To generate an efficient set of test cases, two test coverage criteria are proposed: user experience (UE) and user experience and input interaction (UEII). Test execution optimizations are inferred using a performance simulation model. To show the applicability of the methodology, two mobile networked app examples are used: multimedia streaming and web browsing. The effectiveness of the methodology is evaluated by comparing the time cost to design a test suite with random testing. The obtained results are very promising. Fourth, to minimize the incurred cost of performance model evaluations, we utilize metamorphic testing to generate test cases. Metamorphic testing is a technique that is proposed to alleviate the test oracle problem. By utilizing certain inherent properties of the system under test (metamorphic relations), test cases are generated and verified without the need to know the expected output of each individual test case in advance. By hybridizing our proposed test generation methodology with metamorphic testing, the time cost of generating a test suite is reduced tremendously. We first generate a limited set of seed test cases using our test generation methodology. Then, we generate a set of follow-up test cases by utilizing the developed network models as metamorphic relations and without the need to invoke the performance model. Follow-up test generation is formulated as a maximization problem. The objective is to maximize the distance between a seed test case and follow-up test cases so that to generate a non-redundant set of test cases. Three distance metrics are used: Euclidean, squared Euclidean, and Manhattan. The modified methodology is used to generate test cases for a multimedia streaming application. We empirically evaluate the modified test generation methodology using two evaluation metrics: the incurred time cost and the percentage of redundancy in the generated test suite. The obtained results show the advantage of the modified methodology in minimizing the cost of test generation process. Fifth, we propose a third methodology to evaluate the impact of the wireless network conditions on robustness of performance of adaptive and non-adaptive mobile networked applications. Software robustness is mainly about how the system behaves under stressful conditions. In this work, we target performance robustness under stressful network conditions. The proposed methodology consists of three steps and it requires three different artefacts as inputs. To quantify robustness, two metrics (static and dynamic robustness) are proposed. The main challenge in evaluating robustness is the combinatorial growth of network-application interactions that need to be evaluated. To mitigate this issue, we propose an algorithm to limit the number of interactions, utilizing the monotonicity property of the performance model. To evaluate the dynamic robustness metric, the ability of the adaptive application to tolerate degraded network conditions has to be evaluated. This problem is formulated as a minimization problem. The methodology is used to evaluate the performance robustness of a mobile multimedia streaming application. The effectiveness of the proposed methodology is evaluated. The obtained results show three to five times reduction in total cost compared to the naive approach in which all combinations are exhaustively evaluated.