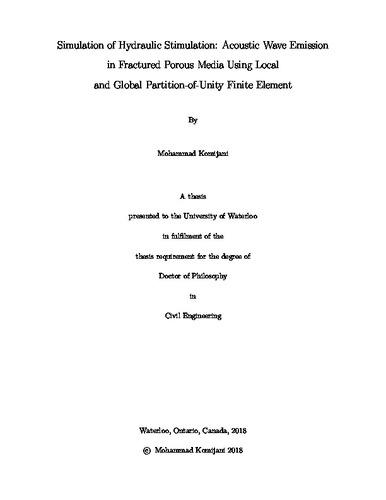 Hydraulic Fracturing (HF) is an effective stimulation process for extracting oil and gas from unconventional low-permeable reservoirs. The process is conducted by injecting high-pressure fluids into the ground to generate fracture networks in rock masses and stimulate natural fractures to increase the permeability of formation and extract oil and gas. Due to the multiple and coupled-physics involved, hydraulic fracturing is a complex engineering process. The extent of the induced fractures and stimulated volume and reactivation of natural faults and fractures are some of the practical issues associated with hydraulic fracturing. Acoustic Emission (AE) monitoring and analysis are used to probe the behaviour of solid materials in such applications. The process of elastic wave propagation induced by an abrupt local release of stored strain energy is known as acoustic, microseismic, and seismic emission (depending on the context and the magnitude of the event). These emissions can be triggered by material bifurcation-instabilities like slope slipping, fault-reactivation, pore collapsing, and cracking - processes that are all categorized as localization phenomena. The microseismic monitoring industry attempts to relate acoustic emissions measured by geophones to the nature of the stimulated volume created during hydraulic fracturing. This process is full of uncertainties and researchers have not yet focused on both explicitly modeling the process of fracture reactivation and the accurate simulation of acoustic wave propagations resulting from the localization. The biggest gap in the modeling literature is that most of the previous works fail to accurately simulate the process of transient acoustic wave propagation through the fractured porous media following the elastic energy release. Instead of explicitly modeling fracturing and acoustic emission, most previous studies have aimed to relate energy release to seismic moment. To overcome some of the existing shortcomings in the numerical modeling of the coupled problem of interface localization-acoustic emission, this thesis is focused on developing new computational methods and programs for the simulation of microseismic wave emissions induced by interface slip instability in fractured porous media. As a coupled nonlinear mixed multi-physics problem, simulation of hydraulic stimulation involves several mathematical and computational complexities and difficulties in terms of modeling, stability, and convergence, such as the inf-sup stability problems that arise from mixed formulations due to the hydro-mechanical couplings and contact conditions. In AE modeling, due to the high-frequency transient nature of the problem, additional numerical problems emerging from the Gibbs phenomenon and artificial period elongation and amplitude decay are also involved. The thesis has three main objectives. The first objective is to develop a numerical model for simulation of wave propagation in discontinuous media, which is fulfilled in Chapter 2 of the thesis. In this chapter a new enriched finite element method is developed for simulation of wave propagation in fractured media. The method combines the advantages of the global Partition-of-Unity Method (PUM) with harmonic enrichment functions via the Generalized Finite Element Method (GFEM) with the local PUM via the Phantom Node Method (PNM). The GFEM enrichments suppress the spurious oscillations that can appear in regular Finite Element Method (FEM) analysis of dynamic/wave propagations due to numerical dispersions and Gibbs phenomenon. The PNM models arbitrary fractures independently of the original mesh. Through several numerical examples it has been demonstrated that the spurious oscillations that appear in propagation pattern of high-frequency waves in PNM simulations can be effectively suppressed by employing the enriched model. This is observed to be especially important in fractured media where both primary waves and the secondary reflected waves are present. The second objective of the thesis is to develop a mixed numerical model for simulation of wave propagation in discontinuous porous media and interface modeling. This objective is realized in Chapter 3 of the thesis. In this chapter, a new enriched mixed finite element model is introduced for simulation of wave propagation in fractured porous media, based on an extension of the developed numerical method in Chapter 2. Moreover, frictional contact at interfaces is modeled and realized using an augmented Lagrange multiplier scheme. Through various numerical examples, the effectiveness of the developed enriched FE model over conventional approaches is demonstrated. Moreover, it is shown that the most accurate wave results with the least amount of spurious oscillations are achieved when both the displacement and pore pressure fields are enriched with appropriate trigonometric functions. The third objective of the thesis is to develop computational models for the simulation of acoustic emissions induced by fracture reactivation and shear slip. This objective is realized in Chapter 4 of the thesis. In this chapter, an enriched mixed finite element model (introduced in Chapter 3) is developed to simulate the interface slip instability and the associated induced acoustic wave propagation processes, concurrently. Acoustic events are triggered through a sudden release of strain energy at the fracture interfaces due to shear slip instability. The shear slip is induced via hydraulic stimulation that switches the interface behaviour from a stick to slip condition. The superior capability of the proposed enriched mixed finite element model (i.e., PNM-GFEM-M) in comparison with regular finite element models in inhibiting the spurious oscillations and numerical dispersions of acoustic signals in both velocity and pore pressure fields is demonstrated through several numerical studies. Moreover, the effects of different characteristics of the system, such as permeability, viscous damping, and friction coefficient at the interface are investigated in various examples.