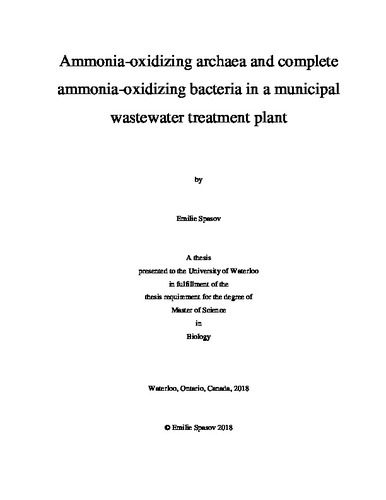 High levels of ammonia in aquatic environments can lead to eutrophication, oxygen depletion, and toxicity to aquatic animals. An important goal of municipal wastewater treatment plants (WWTPs) is to remove ammonia from human waste before the treated effluent is released into receiving waters. Nitrification, the oxidation of ammonia to nitrate via nitrite, is a process that removes ammonia, and it is mediated solely by microorganisms. Historically it was thought that the two enzymatic steps of nitrification were carried out by distinct groups of microorganisms. The first step, aerobic ammonia oxidation, was long-known to be carried out by ammonia-oxidizing bacteria (AOB), and more recently the ammonia-oxidizing archaea (AOA) were discovered as contributors to the same process. The second step, nitrite oxidation, is carried out by nitrite-oxidizing bacteria (NOB), which are phylogenetically distinct from the AOB. However, certain species of Nitrospira are now recognized as being capable of catalyzing both steps of nitrification in the process of complete ammonia oxidation (comammox). Due to the importance of nitrifiers to the functionality of WWTPs, this research aimed to better understand microorganisms and processes associated with ammonia oxidation within the tertiary treatment system biofilm of a municipal WWTP. The Guelph WWTP has four trains of rotating biological contactors (RBCs) that are each composed of eight individual RBC stages. As water flows from RBC 1 to 8, the ammonia concentration decreases due to the activity of ammonia oxidizers. Because of relatively low ammonia concentrations entering the RBCs, compared to secondary treatment aeration basins, and their fixed-film design, these RBCs present a valuable opportunity to study novel nitrifiers, such as the AOA and comammox bacteria. The group I.1b AOA representative Candidatus Nitrosocosmicus exaquare was previously enriched from the RBCs. Initial enrichment cultivation and genome analysis data indicated that ammonia oxidation by this archaeon was stimulated by the addition of organic carbon sources, such as pyruvate and succinate. For other AOA, pyruvate stimulation is likely a result of hydrogen peroxide detoxification, not mixotrophy. Conversely, Ca. N. exaquare may already be capable of detoxifying hydrogen peroxide without pyruvate because it possesses a gene for catalase. Additionally, it possesses dicarboxylate transporters. This suggests that Ca. N. exaquare may be able to use pyruvate and succinate mixotrophically. To test this hypothesis, incubation experiments without organic carbon, and with organic carbon sources or catalase were established. Both succinate and pyruvate did not consistently or significantly stimulate ammonia oxidation over controls with repeated incubations. Catalase was also not stimulatory to nitrite production, indicating that Ca. N. exaquare does not require exogenous catalase, and the pyruvate may be used instead as a carbon source. Evidence for mixotrophy was inconclusive, and further work with a pure culture of Ca. N. exaquare, and experiments with labelled organic carbon, would help determine if this AOA species is capable of mixotrophy. Due to their recent discovery, comammox bacteria had not previously been reported in the Guelph WWTP, and little is known about their abundances in WWTPs. Using a combination of metagenomics and quantitative PCR, the abundance and diversity of comammox bacteria in the RBCs were explored over two sampling years. Taxonomic profiling of all microorganisms revealed that Nitrospira spp. dominated the RBC microbial community. Functional profiling indicated that comammox-associated Nitrospira represented the most abundant group of ammonia-oxidizing microorganisms. The diversity of comammox bacteria was also high, with multiple populations present. A cluster of comammox Nitrospira was also phylogenetically distinct from cultivated comammox species and these taxa represent ideal targets for future cultivation efforts. Genetic evidence that RBC Nitrospira are capable of complete ammonia oxidation includes Nitrospira metagenome assembled genomes that contain genes for both ammonia oxidation (e.g. amoA) and nitrite oxidation (e.g. nxrB). The results indicate that comammox bacteria co-exist with AOA and AOB, as well as with strict nitrite-oxidizing Nitrospira. The ammonia oxidizers displayed distinct patterns in relative abundance. In 2010 samples, AOA-associated amoA and 16S rRNA genes were higher in abundance in RBC 8 than RBC 1, but the opposite pattern was observed for 2016 samples. The relative abundance of AOB amoA genes was lower for 2016 samples than 2010 samples, suggesting a change in the environmental conditions of the RBCs. The relative abundance patterns of comammox Nitrospira amoA genes were consistent across the two years. This study indicated that the environmental factors that govern AOA, AOB, and comammox bacteria differ, suggesting that these groups occupy distinct niches within this wastewater biofilm environment. This thesis research is an important step towards understanding the nitrifying microorganisms in the Guelph RBCs. Although Ca. N. exaquare possesses the ability to deal with hydrogen peroxide stress, this research did not conclusively address organic carbon stimulation and assimilation. This thesis work showed that comammox bacteria were the dominant ammonia oxidizers in the Guelph RBCs, and this is the first study showing that comammox bacteria can be the dominant nitrifiers in a WWTP. This research paves the way for future studies on the microbial ecology of nitrification in engineered and aquatic environments.