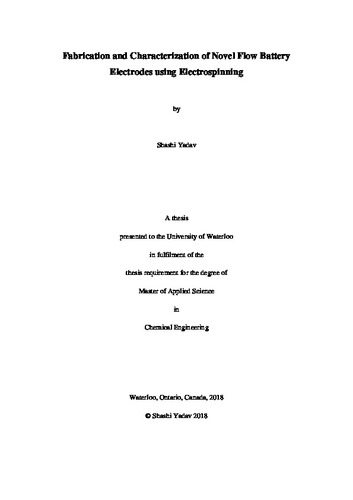 The increase in energy demand, depletion of fossil fuel reserves and climate change has shifted our focus to using renewable energy resources. Alternative energy sources, though environmentally friendly, are intermittent and thus require large-scale energy storage to buffer the temporal mismatch between power generation and power consumption. Flow batteries are a leading candidate for this role due to their decoupled energy and power capacity. The energy and power density of flow batteries are generally lower than that of lead-acid, lithium-ion and nickel metal hydride batteries. Improving electrode properties and structure can lead to increased power density of flow batteries. Instead of modifying the commercially available carbon paper, this study focused on fabricating electrodes using electrospinning. A novel technique was developed to make electrodes composed of flat fibres relative to commonly used cylindrical fibre electrodes. The electrodes were then characterized for various properties such as fibre size, porosity, surface area, permeability and electrical conductivity. The change in fibre morphology led to an increase in reactive surface area and permeability of the electrode. This can help to improve reaction kinetics and mass transport in electrodes and thereby the power density and performance of flow batteries.