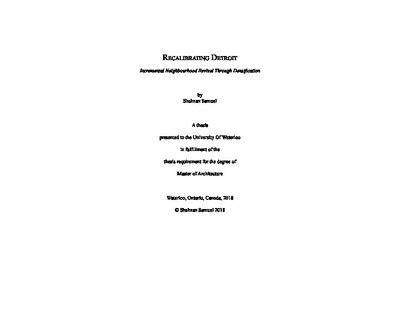 This thesis analyses factors responsible for Detroit’s past growth and delves into its current transient culture. The phenomena of its urban shrinkage is more than just a demographic shift. It is a harbinger of qualitative changes that permeate social, economic and cultural aspects of Detroit’s urban life. The phenomena of shrinking cities has challenged architecture and planning disciplines to seek a divergent role. One tasked with a quest to find urban constraints propagating a transient culture, and then speculating a new urban form and a process for achieving it. In order to halt urban shrinkage, Detroit will have to set itself on the path of urban recalibration. It further proposes an animated process, leading up to an urban model of a polycentric net with nodes of vitality to provide focal points for urban recovery of its neighborhoods. The analysis of the current urban fabric is focused on urban density, continuity, and the quality of the urban grain. In order to achieve a new paradigm, this thesis proposes a phased process for incremental densification while reprogramming its urban grain of community life and its built environment. Incremental densification is a systemized bootstrap process, flexible and adaptively responsive to urban transience and indeterminable prognosis. To achieve a sustainable urban form, each modest phase can then be incrementally implemented by the residents and small scale actors, all free from large scale corporate and speculative builders.