An ALMA View of Molecular Gas in Brightest Cluster Galaxies 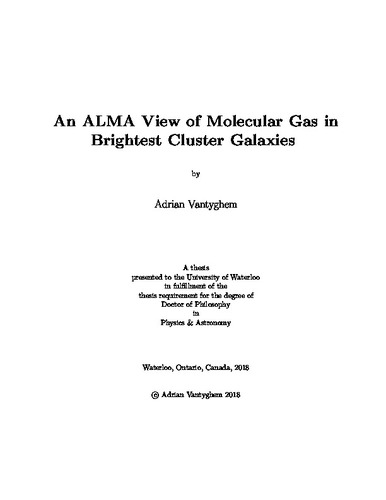 In this thesis I use ALMA observations to map the distribution and kinematics of molecular gas in the brightest cluster galaxies of three galaxy clusters: 2A0335+096, RXJ0821+0752, and RXCJ1504-0248. The goal is to understand how the coldest gas in clusters is formed, identify any long-lived structures that could fuel sustained black hole accretion, and explore star formation in cluster environments. I use the J=1-0 and J=3-2 rotational transitions of carbon monoxide (CO) as tracers of the total molecular gas distribution. The two transitions provide different resolutions and fields of view. The molecular gas in all three central galaxies are complex and disturbed. None show evidence for rotationally-supported nuclear structures, such as a disk or ring, that would be expected from either a merger origin or long-lived cooling flow. Instead, the molecular gas is either clumpy with no clear velocity structure or extends away from the galactic center in filaments that are several kiloparsecs long. The molecular filaments are coincident with nebular and bright X-ray emission, suggesting that they have condensed out of the hot intracluster medium. They are also generally associated with cavities in the X-ray emission inflated by the active galactic nucleus (AGN), suggesting that AGN feedback has stimulated the formation of molecular gas. The narrow velocity gradients along the filaments are only consistent with freefall if the filament is situated close to the plane of the sky. This is a common feature in brightest cluster galaxies. Since ram pressure is ineffective at slowing dense molecular clouds, the filaments must either be pinned to the hot atmosphere by magnetic fields or have condensed in-situ relatively recently. In RXCJ1504-0248 I combine the ALMA analysis with spatially-resolved ultraviolet emission tracing young stars. The central gas falls on the Kennicutt-Schmidt relation, while the filament has elevated star formation surface densities. The ongoing consumption of a finite fuel supply by star formation, or spatial variations in the CO-to-H2 conversion factor, may be diminishing the molecular gas surface density to produce this effect. Despite their drastic differences in morphology and environment, the molecular gas in clusters is still converted into stars following the same relation as in spirals and starbursts. I have also detected the J=3-2 transition from 13CO, an optically thin isotopologue of 12CO, in RXJ0821.0+0752. This enables a measurement of the conversion between CO intensity and molecular column density for the first time in a galaxy cluster. The CO-to-H2 conversion factor in RXJ0821+0752 is half of the Galactic value. If this value applies to other clusters, then it would alleviate the high coupling efficiencies required for molecular filaments to be uplifted by X-ray cavities. This analysis also provides reassurance that the molecular gas masses measured in BCGs are unlikely to be overwhelmingly biased by adopting the Galactic conversion factor.