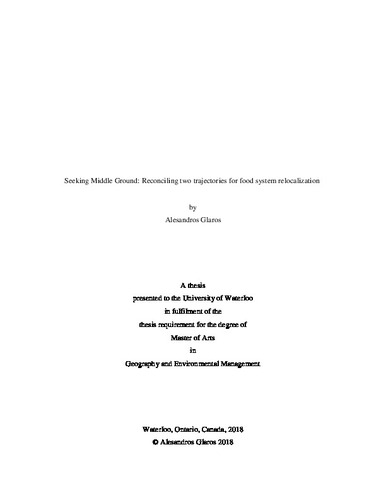 As food systems expand in scale and scope, the sources of their negative externalities are less effectively identified. Globally, this diffusion has resulted in a plethora of paradoxes, as well as a decrease in overall food system resilience to socio-economic and ecological drivers of uncertainty. Relocalizing food production is a potential strategy to address the challenges of conventional food systems. However, relocalization is an umbrella term, with two distinct food production trajectories. One vision for local food system development seeks to holistically integrate human agency with natural agro-ecosystem processes. For example, some activists, scholars and policy makers discuss community-managed organic gardens or agro-ecological farms as critical components of sustainable and just urban food systems. Conversely, several engineers and researchers are seeking to (semi)-separate agricultural activity from an increasingly capricious biosphere, through the development of capital-intensive vertical farming and meat-synthesis technologies. As proponents of both trajectories attempt to construct more localized foodsheds, it is important to consider their potential opportunities, as well as their underlying values and practices, in hopes of enacting broad food system change. The paradigmatic and practical differences between conventional and alternative food systems have been well-elucidated within geographic literature; however, a growing body of scholarship is adopting a more nuanced approach to discuss the multiplicity of alternative agriculture developments. This thesis contributes to this body of literature, through: (1) comparing the outlooks of two distinct local food trajectories for attaining resilient, just food systems; and (2) assessing their underlying values and paradigms. To accomplish this, a thorough review of the literature on local food systems was carried out, in addition to an analysis of twenty-six interviews with stakeholders involved in local food production projects in China as well as Canada. A further twelve publicly-available interviews were selected for analysis. Interviewees included farm managers, researchers, urban planners, urban designers, and community food program managers. The results of this study suggest that the two local food production trajectories have conflicting outlooks for realizing food system justice and resilience. Capital-intensive approaches to local food production have huge productive potential and capacity for resilience-building, through disrupting and optimizing energy-capture processes in agricultural systems, while liberating vast tracts of agricultural land. However, several scholars critique current operations for perpetuating the central tenets of conventional food production, including: commodification, global commodity trade, and the further dis-embedding of consumer relationships with producers and nature. In contrast, more ‘traditional’ approaches to local food production often strengthen community relations and offer opportunity for traditional knowledge sharing and environmental virtue development. However, these operations are time and labour dependent, and are fundamentally dependent on a relatively stable biosphere. These findings suggest that both trajectories, if combined, may address the shortcomings of one another. In terms of underlying paradigms and practices, the results of this study align with an array of literature arguing that local food production projects act in both alternative and conventional ways. Interviewees from both trajectories engaged in multiple forms of economic exchange, and viewed their operations as part of a broader system of local, regional and global, and small to large-scale food production actors. Interviewees from both trajectories differed in their normative commitments to agro-ecosystem management, suggesting that food production is a complex process that cannot be separated from its natural environment, or that food production can be isolated and optimized. To transform conventional food systems, local food production operations must engage with, and work within, broader socio-political institutions. Creating an environment in which local food production projects can experiment with alternative values and practices is critical for their development, in face of increasing socio-economic and ecological uncertainty.