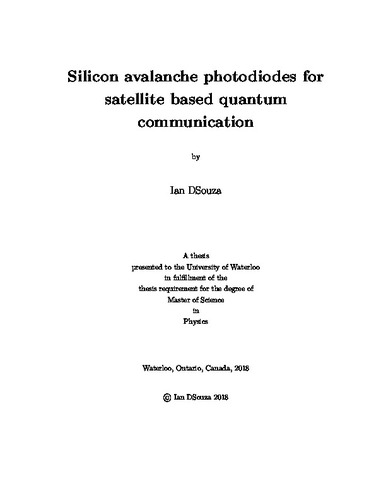 Single photons detectors are required for applications like quantum key distribution and testing Bell's inequalities. Silicon avalanche photodiodes (Si APD's) have advantages like low dark count rate. This thesis aims to experimentally characterize Si APD's under conditions experienced in low earth orbit on board a satellite and also develop supporting algorithms and simulations. In chapter 1, I motivate the use of Si APD's as single photon detectors on a satellite. I also briefly explain the how these APD's work and the related electronics. In chapter 2, I describe the test setup used in the laboratory at the Institute for Quantum Computing to characterize the APD's. I then explain how one goes about measuring and/or calculating the different characteristic parameters of the APD. These characteristics include breakdown voltage, output pulse characteristics, recharge time, dark counts, detection efficiency, timing jitter of APD, saturation value and afterpulsing probability. The aim of the lab characterization is to form a baseline measurement under nominal conditions before we introduce the APD to conditions of low Earth orbit. In chapter 3, the APD's are exposed to proton radiation which is expected in low Earth orbit. Such radiation causes displacement defects in the APD's substrate and increases dark counts. Previous work [1] has shown that thermal annealing (increasing the APD temperature for a period of time) is successful in decreasing the dark count rate to operational range. It is anticipated that multiple annealing instance would be needed in operation under constant bombardment of protons. The work in this thesis explores possibility of using annealing repeatedly by alternating instances of proton irradiation and annealing. Other parameters of the APD are also under scrutiny to see if they change over the course of this experiment. A secondary objective explores if it is better to anneal only when the dark count rate drops below a threshold value or anneal after fixed intervals of time regardless of the dark count rates. A novel algorithm is also developed to analyze the afterpulsing probability. The algorithm is applied to simulated thermal count and afterpulse timetags to demonstrate its effectiveness. It is also applied to the data set drawn from the experimental tests of proton irradiation and thermal annealing to calculate the afterpulsing probability. In chapter 4 the APD's are exposed to the vacuum conditions that they would encounter in low Earth orbit. The bracket and radiator are set to different temperatures to simulate thermal variations in orbit. The detectors are then characterized for the aforementioned parameters to ensure they are in operable range. In chapter 5, I distinguish between the usual notion of afterpulsing probability which relates to the probability of trapping of charge carriers and the observed afterpulsing probability which differs from the former due to dead time and recharge time. I then use first principles to derive the observed afteprulsing probability as a function of charge trapping probability, charge detrapping lifetime, dead time and thermal count rate. I further go on to lay the theoretical ground work the afterpulsing algorithm developed in section 3.3.8 by deriving the analytical expression for the histogram between time differences of consecutive time tags and then justifying the linearity of the thermal region of the histogram. Finally, in chapter 6, I devise a numerical experiment where I simulated a quantum link to implement the quantum key distribution. I model the photon statistics of a weak coherent pulsed laser and the parameters of a Si APD (the one mentioned above). I then model the coincidence algorithm to determine photon coincidences and model a simple intercept and resend attack. I calculate statistical quantities of quantum bit error ratio and sifted key generation rate.