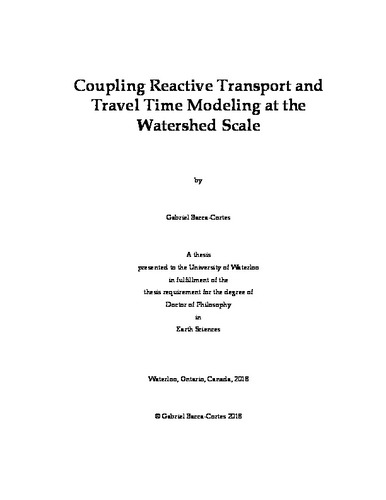 Nonpoint source pollution poses the greatest threat to water quality in developed countries. Modeling this type of pollution is a challenge for reactive transport models because of the change in scale: moving from a local field site- to a watershed-size problem. Computational resources and detailed watershed characterization are the major limiting factors in the fully time- and space-resolved modeling of the subsurface fate and transport of pollutants from nonpoint sources. While detailed characterization has been performed on a few well-studied watersheds, the knowledge derived from these watersheds has not led to a better understanding of watershed functioning in ungauged watersheds. Consequently, alternative approaches to modeling subsurface nonpoint source pollution have emerged to inform risk assessment to water resources and watershed management. This study investigates the development of a methodology that decouples flow and transport with the implementation of an analytical approach for 1-D travel time probability distribution functions (PDFs) to simulate subsurface flow at the watershed scale, that is, a 3-D problem. The first two chapters of my thesis focus on constraining and providing tools for the implementation of this methodology in watersheds. First, the analytical methodology for travel time was tested under varying conditions of heterogeneity, slope, and aquifer depths that were imposed on a virtual watershed, using Alder Creek, Ontario, as a test case. The analytical method parameters for the 28 scenarios considered were calibrated against the travel time PDFs generated with a 3-D numerical model (FEFLOW), which was used as baseline for comparison. The analytical method simulations revealed a negative relationship between the watershed mean travel time (wMTT) and the degree of imposed heterogeneity (σ_Y^2) of geostatistically defined permeability fields. This relationship was attributed to the effect of preferential flow paths. The effect of increasing aquifer depth (i.e., bedrock topography) on wMTT was similar to that of reducing the slope in surface topography, both resulting in an increase in wMTT. Given the promising results of the analytical method in the Alder Creek virtual analogs, further testing was conducted in 8 additional virtual watersheds. This inter-watershed comparison study examined the effects of 28 geomorphological indexes on wMTT and their predictive power in estimating analytical model parameters. This study is the first inter-watershed comparison of subsurface models that establishes relationships between watershed features and hydrologic functioning for groundwater storage and discharge. Among the classes of watershed features considered, those related to elevation (e.g. Relief), texture topography (e.g. drainage density, Dd), and Horton’s law (e.g. bifurcation factor, RB) were the most influential geomorphological classes emerging in the developed regression models. These regression models enable the application of the analytical methodology for deriving travel time PDF in other environmental settings. The transferability of these tools was verified for three extra watersheds in which the particle median travel time (pMTT), and their travel time distribution (TTD) performed on par to the upper tier of the original watersheds. Further research is proposed to include subsurface heterogeneity in the analysis to better evaluate its role in regulating wMTT in a subset of these watersheds. This methodology may constitute in a viable modeling alternative where subsurface information is scarce or scale limitations exist in developing a subsurface numerical model. The analytical methodology can provide a first line of knowledge in subsurface travel time and its distribution in an ungauged basin through the use of readily available tools (i.e., GIS and MATLAB). This knowledge can be later challenged or verified as more information becomes available. Potential directions to explore for the improvement of the methodology are proposed for further research. The third chapter applies the travel time PDF approach to the allocation of nitrogen (N) fluxes from base flow contributions to stream water chemistry in an existing hydrological model of Carroll Creek (Grand River basin, Ontario). This is a prospective chapter in which an outline for the development of an N isotope model linked to a hydrological model is presented. The N isotope model includes relevant N transformation and 15N fractionation processes in the plant-soil system and aims at simulating N-NO3- concentrations and isotopic compositions (δ15N). A bottom-up, stepwise approach is proposed in order to determine the most essential 15N discriminating processes and spatial discretization required by the model to match observations in the watershed.