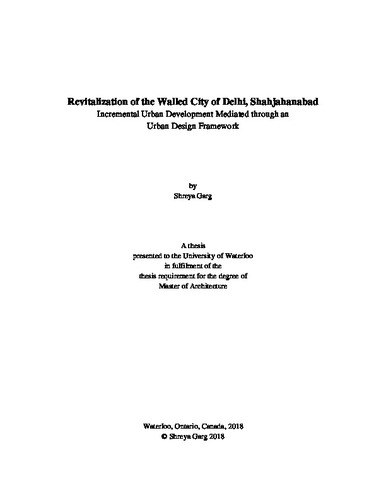 Shahjahanabad, the historic center of Delhi, built in 1638, offers an old-world charm that fosters a culturally rich community. Also known as Old Delhi, the hustling streets, the vibrancy of the old city life and the people who live like a close-knit family, are the heart of the city. The transition from developing nation by modernization has led to rapid urbanization in Delhi over recent decades. Shahjahanabad, being the historic center, has been at the receiving end of this explosion in population growth. Migration of thousands of people from rural as well as urban agglomerations has impacted the civic infrastructure and constantly challenges the resilience of the city. The permanence of the existing high-density urban form in Old Delhi, and the increasing crisis for shortage of living space, intensifies the conflict between the need to preserve the history of the city while accommodating increased density. The thesis proposes selective minimization of Old Delhi’s physically decaying historic built form and re-imagine derelict building sites as spaces of resourcefulness to cater to the needs of the community. The research on the existing apparatus of urban development and housing conditions informs the thesis and the application of planning principles to different site conditions. An exploration of the thesis design principles on different sites, develops mixed-use housing typologies which forms a new urban condition amenable to the old with the existing built fabric. Through an assemblage of new collective dwelling, the development done by incremental changes aims to bring the present Old Delhi population and the new migrant residents together in their differences and informs them of a better quality of living moving forward.