Marketplace Lending and Credit Unions: Where the Past and Future of Peer-to-Peer Finance Meet 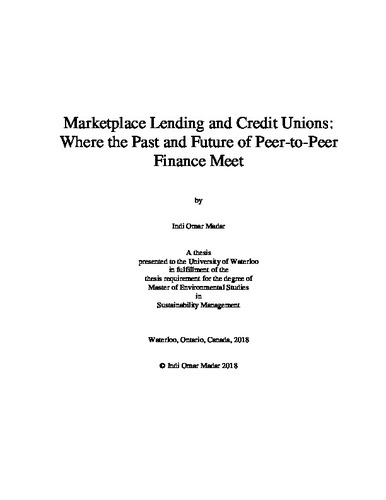 Peer-to-peer (P2P) or marketplace lending has expanded rapidly since the 2008 global financial crisis. While the idea of pooling small amounts of money from several lenders is not new, advances in financial technology (fintech) have resulted in scalable, efficient, and global processes. Since Zopa (the world’s first P2P lending platform, launched in 2005), the lending has increasingly shifted away from individual lenders working collaboratively to assess loans, and now includes automated decision-making algorithms with institutional lenders such as hedge funds and banks. Consequently, marketplace lending threatens to disrupt many activities of the financial sector. Although the industry has experienced significant growth in the UK and the USA, it is only recently, in 2016, that some Canadian regulations implemented new crowdfunding rules; these include allowing retail lenders to invest up to $10,000 annually. Similar to chartered national banks, Canada’s sub-national credit unions might feel challenged by emerging fintech firms. As such, through the resource-based view (RBV) of strategic alliances, this thesis sought to answer the question, How are Canadian credit unions entering the marketplace lending industry? The study employed an exploratory, qualitative design where semistructured interviews were conducted with 17 participants from 12 credit unions (including one credit union central) of the Canadian Credit Union Association (CCUA), but outside of Quebec’s Desjardins system of caisses populaires. In these interviews, three areas of prominent credit union business are explored: the use of marketplace lending for small- and medium-sized enterprise (SME) financing; impact investing; and the use of marketplace lending in providing alternatives to payday loan products. The study’s findings revealed that out of the 12 credit union members from the sample, three have partnered with fintech firms, one is developing its own lending platform, and the majority are simply monitoring the evolution of marketplace lending in Canada. Regarding the latter, perceived risks and/or barriers include regulations, reputational risk, and difficulty attracting deposits. However, reported opportunities include using marketplace lending to enhance member retention and attraction, and lending to socially and environmentally motivated SMEs. This thesis contributes to the academic literature by providing evidence as to how Canadian credit unions are entering the marketplace lending industry. It details the reported barriers and/or risks and opportunities, and the motivating drivers to form strategic alliances with start-up fintech firms.

Indi Omar Madar (2018). Marketplace Lending and Credit Unions: Where the Past and Future of Peer-to-Peer Finance Meet. UWSpace. http://hdl.handle.net/10012/13903