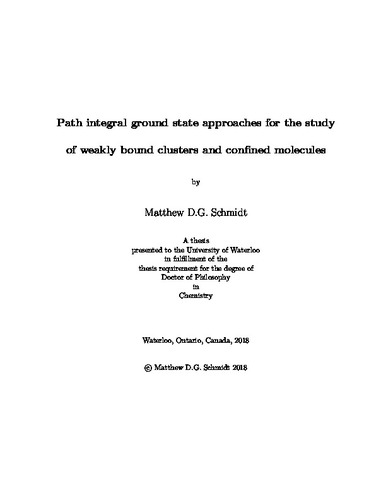 This thesis presents the study of weakly bound clusters in the ground state (or the zero-temperature limit) using path integral molecular dynamics. Specifically, we look individually at the quantum properties of small clusters of hydrogen and water molecules and confined hydrogen within water cages, known as clathrate hydrates, which serves as a more practical application. Clathrate hydrates have been extensively studied as a clean storage container for molecular hydrogen and there have been discrepancies on the hydrogen occupancy number between various theoretical and experimental studies. It has been shown that the occupancy number is sensitive to the potential energy surfaces and models of the hydrogen and water systems. A preliminary study of hydrogen contained in clathrates is performed using a traditional hydrogen pair potential and water-hydrogen interaction potential. Hydrogen occupancy and structural distributions are compared to literature values. Small clusters of the individual molecules themselves are then focused on. The molecular hydrogen pair potentials are evaluated by calculating the Raman vibrational shift, a property that is very sensitive to the interaction potential, and comparing to experimental measurements. These shifts are calculated using first order perturbation theory based on pair distribution functions generated from Langevin equation path integral ground state (LePIGS) simulations for all bosonic isotopologues. It is determined that the shifts calculated using the Hinde pair potential give better agreement to experimental results than the traditional hydrogen potentials that we have been using in the past. The perturbation theory approach is then compared with two exact methods to calculate the shifts. For the application of hydrogen clusters, it is determined that perturbation theory is the best choice when balancing accuracy and precision. In the literature, there has been a discrepancy in the shape of the chemical potential at low temperature and in the ground state. We calculate the ground state chemical potential using LePIGS and find agreement with other PIGS results. We then extend our LePIGS code to simulate flexible molecules by investigating the water dimer. Ground state energies, dissociation energies, and structural properties are calculated using two empirically based interaction potentials and one ab initio potential, MB-pol, that includes polarizability and many-body effects which has been shown to reproduce experimental dissociation energies. We further demonstrate that imaginary time correlation functions generated from LePIGS can be used to calculate accurate vibrational transition energies. This work serves as a demonstration of the effectiveness of the LePIGS method towards calculating ground state properties of small clusters and provides useful information on the interaction potentials that should be used for systems containing hydrogen or water, specifically hydrogen contained in a flexible clathrate hydrate. An analytic form of the 1-D Hinde pair potential for molecular hydrogen is also contained for general use.