Production of 3-hydroxy acids from acetate in engineered Escherichia coli 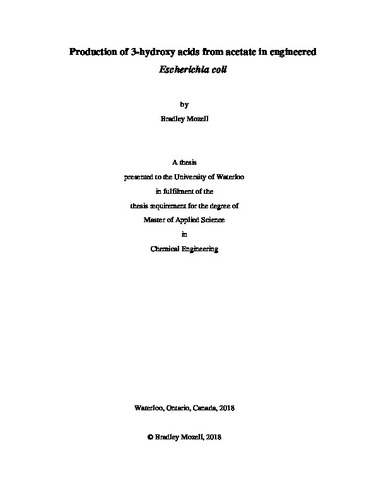 Acetate serves as an uncommon carbon source for metabolic engineering of value-added chemicals. As a carbon source, acetate has unique advantages since it is not derived from food sources and can be produced as a waste by-product from many biological processes. This allows acetate to be an inexpensive feed source for biomanufacturing whose use would not affect food prices. However, use of acetate as a feed source for bioproduction is limited by its inhibitory effects. As such, fine chemicals, which have high value and low production demand, are preferred target products for bioproduction using acetate feed. 3-hydroxy acids, i.e. 3-hydroxybutyrate (3-HB) and 3-hydroxyvalerate (3-HV), are one such example of fine chemicals. This study demonstrates the production of 3-HB and 3-HV in recombinant Escherichia coli, using acetate as a sole carbon source. Various metabolic pathways related to acetate metabolism such as; acetate assimilation, glyoxylate shunt, glycolytic and gluconeogenic pathways related to the phosphoenolpyruvate-pyruvate node, as well as global regulatory systems, were manipulated through targeted gene knockouts, to boost the production of 3-hydroxy acids. These genetic manipulations of the base 3-hydroxy acid-producing strain of E. coli resulted in the production of up to 1.75 g/L of 3-HB and 0.571 g/L of 3-HV (individually).