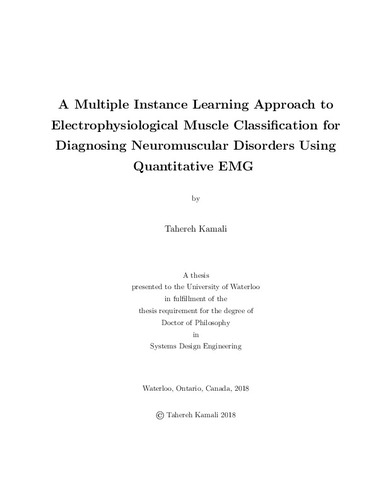 Neuromuscular disorder is a broad term that refers to diseases that impair muscle functionality either by affecting any part of the nerve or muscle. Electrodiagnosis of most neuromuscular disorders is based on the electrophysiological classification of involved muscles which in turn, is performed by inferring the structure and function of the muscles by analyzing electromyographic (EMG) signals recorded during low to moderate levels of contraction. The functional unit of muscle contraction is called a motor unit (MU). The morphology and physiology of the MUs of an examined muscle are inferred by extracting motor unit potentials (MUPs) from the EMG signals detected from the muscle. As such, electrophysiological muscle classification is performed by first characterizing extracted MUPs and then aggregating these characterizations. The task of classifying muscles can be represented as an instance of a multiple instance learning (MIL) problem. In the MIL paradigm, a bag of instances shares a label and the instance labels are hidden, contrary to standard supervised learning, where each training instance is labeled. In MIL-based muscle classification, the instances are the MUPs extracted from the EMG signals of the analyzed muscle and the bag is the muscle. Detecting and counting the MUPs indicating a specific category of a neuromuscular disorder can result in accurately classifying the examined muscle. As such, three major issues usually arise: how to infer MUP labels without full supervision; how the cardinality relationships between MUP labels contribute to predict the muscle label; and how the muscle as a whole entity is classified. In this thesis, these three challenges are addressed. To this end, an MIL-based muscle classification system is proposed that has five major steps: 1) MUPs are represented using morphological, stability, and novel near fiber parameters as well as spectral features extracted from wavelet coefficients. This representation helps to analyze MUPs from a variety of aspects. 2) MUP feature selection using unsupervised similarity preserving Laplacian score which is independent of any learning algorithm. Hence, the features selected in this work can be used in other electrophysiological muscle classification systems. 3) MUP clustering using a novel clustering algorithm called Neighbourhood Distance Entropy Consistency (NDEC) which contributes to solve the traditional problem of finding representations of MUP normality and abnormality and provides a dynamic number of MUP characterization classes which will be used instead of the conventional three classes (i.e. normal, myopathic, and neurogenic). This clustering was performed to highlight the effects of disease on both fiber spatial distributions and fiber diameter distributions, which lead to a continuity of MUP characteristics. These clusters can potentially represent several concepts of MUP normality and abnormality. 4) Muscle representation by embedding its MUP cluster associations in a feature vector, and 5) Muscle classification using support vector machines or random forests. Quantitative results obtained by applying the proposed method to four electrophysiologically different groups of muscles including proximal arm, proximal leg, distal arm, and distal leg show the superior and stable performance of the proposed muscle classification system compared to previous works. Additionally, modelling electrophysiological muscle classification as an instance of the MIL can solve the traditional problem of characterizing MUPs without full supervision. The proposed clustering algorithm in this work, can be used as an effective technique in other pattern recognition and medical diagnostic systems in which discovering natural clusters within data is a necessity.