The Association between Visual Attention and Body Movement-Controlled Video Games, Balance and Mobility 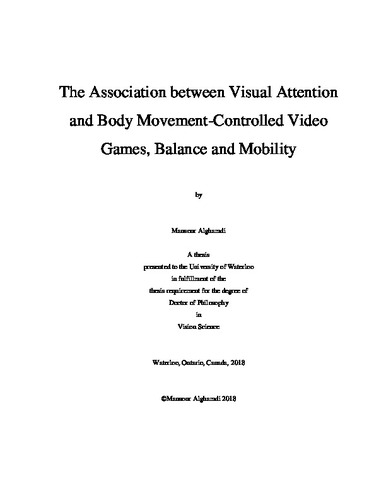 Purpose: Interactive video virtual-reality body movement games such as Xbox Kinect may have potential for training visual attention and physical fitness concurrently in older adults in order to reduce the risk of falls. The purpose of this study was to investigate the relationships between performance in these types of games and visual attention, mobility and balance measures. This information is important before commencing any future randomised trial regarding the effectiveness of training visual attention and physical abilities with such games. Methods: This thesis includes two cross sectional studies of healthy adults, the first with an older (aged +65, n=50) and the second with a younger group (aged 18-40, n=50). Visual attention was measured with two different tests: useful field of view (UFV) and multiple object tracking (MOT). The useful field of view included two versions: a static (UFV-S) similar to those used in previous studies and a new dynamic version (UFV-D). For balance, body sway was measured with the Accugait portable force plate which records the center of pressure (CoP) under the feet. Body sway was measured in bi-pedal quiet stand test (QST) and one-legged stand (OLST). The medial-lateral (ML) and anterior-posterior (AP) CoP variability, ML and AP CoP maximum displacement, ML and AP CoP range and the cumulative path length were calculated. For mobility, the Five Meter Walk Test (5MWT) was used to observe the gait variability and walking speed. Stride and step lengths and widths were measured. The average and standard deviation of steps lengths (SL) and widths (SW) were calculated. Lastly, the velocity over the leg length (Vel-L) ratio was calculated to adjust participants’ speed according to their leg length. Performance in two pairs of games using the Microsoft™ Xbox® 360 Kinect™ interactive video game system was used in this study and were chosen based on the apparent visual attention demand. The first pair had apparently high visual attention demand and the second pair had apparently lower visual attention demand. All the games had a physical component (exercise games). Results: In both experiments, measures of visual attention (UFV and MOT) showed correlations with Xbox Kinect game scores that appeared to have a high visual attention demand, while there was minimal or no significant association with the games of apparent low visual attention demand. Static useful field of view (UFV-S) was the most common visual attention test that showed correlations with the high visual demand. Dynamic useful field of view (UFV-D) had a role for the younger group, but not in the older adults. Multiple regression models showed that scores for some of the games with high visual attention demand were predicted by visual attention measures. Age was also a predictor in the older group. The games with low visual attention demand were found to be mainly predicted by balance and/or mobility measures. There were correlations between some visual attention tests and balance and mobility in the older adult group which remained after adjustment for other factors. However, visual attention measures were not found to be predictors for any balance and mobility measures in the multiple regression models for either group. Significant correlations were found between Xbox Kinect games and some measures of balance and mobility. Conclusion: The results in this study suggest that there are relationships between visual attention, balance, mobility and Xbox Kinect games performance. Thus, playing these games may train visual attention and improve the balance and mobility over time. However, the choice of the game is important as some are more associated with physical ability and others with attention. Playing Xbox Kinect games may have a potential for training visual attention as well as physical abilities, but the game chosen is critical and a battery of games may be most effective.