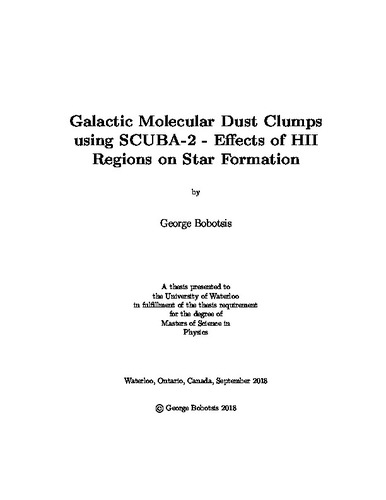 I present findings from a broad array of SCUBA-2 observations. The sample consists of 38 SCUBA-2 images targeted near mature, galactic, HII regions of the Sharpless "Sh-2" or Blitz-Stark-Fich "BFS" catalogue. In 31 of those images, dusty molecular clumps are identified by-hand using SCUBA-2 450μm and 850μm data and HII regions are identified using VLA 1.46/4.89 GHz data. Photometry and derivative properties are obtained using scripted routines. In total, 185 molecular clump composites hosting 333 cores are identified in the SCUBA-2 images. After segregation takes place for their association with nearby HII regions, a total of 176 clumps and 315 cores continue into analysis. A full property dataset is obtained for these clumps and their components as well as their associated HII regions. The SCUBA-2 clump identification process leads to strong evidence in support of increased clump condensation occurring near HII region boundaries. In addition, the HII regions are found to have a compressing effect on the outer layers of their associated clumps due to the pressure differential between the two. Average temperature analysis reveals that the portion of cores that are hotter than their surrounding cloud medium (i.e potentially collapsing and star forming) is comparable to the portion of cores colder than their surrounding cloud medium (i.e stable). Cloud segments are found to become cooler with increasing column and number density, suggesting they are not significantly heated by external mechanisms and are able to cool more efficiently at denser states. Cores are also found to be cooler with increasing column density and depict no significant temperature change with increasing number density, suggesting that most of their heating is coming from internal processes such as gravitational contraction and that the heating from this process is on the same order as the convective cooling taking place. No correlation is found between the average temperature of a cloud segment and the accumulated mass of its embedded cores. HII regions as well as OB stars are observed to have a mild heating effect on the cores and cloud segments of this molecular clump sample. The mildness of the OB star heating effect is expected to occur due to the very low incident fluxes encountered in this sample of clumps (≤ 1 W/m²). HII regions themselves show a rapid decrease in electron number density with increasing radial size. The opposite trend is observed for their total mass. The few HII region systems for which a complete description was obtained suggested a mean Star Formation Efficiency (SFE) of 4.82%, with a max of 38.72% and a min of 0.216%. However, most of the analyzed systems have an SFE value ≤ 1%. Finally, significant effort was made in identifying the greatest uncertainty contributors to SCUBA-2 data. Out of all, atmospheric emission and absorption were found to be by far the most dominant. Furthermore, a stochastic Monte-Carlo technique was developed for tending to the asymmetric nature of uncertainty in all SCUBA-2 temperature-dependent properties. This helped better understand the uncertainty introduced from a prescribed opacity model as well as the use of a non-linear temperature model.