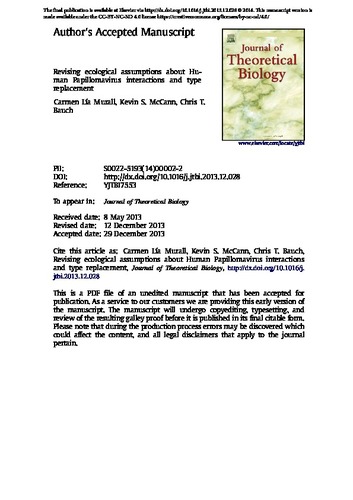 The controversy over whether vaccine-targeted HPV types will be replaced by other oncogenic, non-vaccine-targeted types remains unresolved. This is in part because little is known about the ecology of HPV types. Patient data has been interpreted to suggest independence or facilitative interactions between types and therefore replacement is believed to be unlikely. With a novel mathematical model, we investigated which HPV type interactions and their immune responses gave qualitatively similar patterns frequently observed in patients. To assess the possibility of type replacement, vaccination was added to see if non-vaccine-targeted types increased their 'niche'. Our model predicts that independence and facilitation are not necessary for the coexistence of types inside hosts, especially given the patchy nature of HPV infection. In fact, independence and facilitation inadequately represented co-infected patients. We found that some form of competition is likely in natural co-infections. Hence, non-vaccine-targeted types that are not cross-reactive with the vaccine could spread to more patches and can increase their viral load in vaccinated hosts. The degree to which this happens will depend on replication and patch colonization rates. Our results suggest that independence between types could be a fallacy, and so without conclusively untangling HPV within-host ecology, type replacement remains theoretically viable. More ecological thinking is needed in future studies.