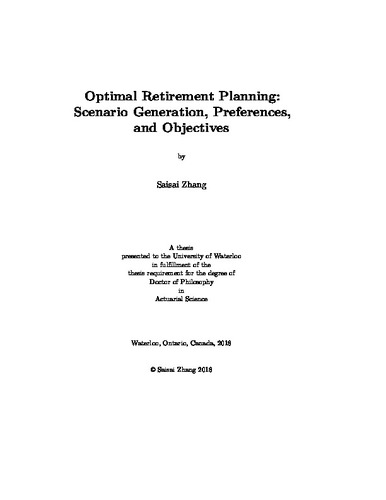 The global trend of shifting from defined benefit (DB) to defined contribution (DC) workplace pension plans is putting growing pressure on individuals to take more ownership in retirement planning and financial decision-making. The essence of the DB is the life-long income guarantee, which requires limited financial planning decisions to be made, either in the accumulation or decumulation phase. The DC on the other hand, is significantly more complex. The lump sum payment at retirement burdens individuals with the task of income generation, in the presence of challenges stemming from an uncertain future lifetime, economic conditions, and evolving consumption needs. The average retiree has limited competency to navigate these challenges, due to low financial literacy, lack of willpower, or deteriorating cognitive abilities with older ages. The high stake of these challenges calls for a normative solution to be proposed - a solution that considers the intricacy of risks, preferences, and normative objective formulations. The objective of this thesis is to explore such a solution. This thesis comprises three inter-related research directions: long-term economic scenario generators (ESGs), recursive preferences in life-cycle portfolio selection, and retirement objective formulation. A brief description of the subsequent chapters will now follow. The first chapter conducts a review of Wilkie's ESG, with analysis restricted to series pertinent to retirement planning. Our main findings indicate that there exist challenges in modelling long-term economic series due to the presence of multiple structural shifts in the historical time series. Consequently, certain assumptions of stationarity are violated, and parameters are sensitive to the calibration period. A backtest based on 30-year out-of-sample data indicated that over that period the model had tended to overestimate inflation, underestimate total return on stocks, and performed relatively well for long-term interest rates. Additionally, Wilkie's ESG can be under-representative of the risk in long-term stock investment, particularly in the tails. The second chapter provides an introductory discussion of Epstein-Zin preferences, which are adopted in the succeeding chapter as a normative preference model. The purpose is to first investigate the implied optimal behaviour and its plausibility. We pay particular attention to whether the output leads to plausible behaviour given the context of retirement planning. Specifically, analytical solutions for a simple consumption problem are derived, isolating the impact of relative risk aversion (RRA), elasticity of intertemporal substitution (EIS), time discounting, and risks stemming from mortality, investment, and inflation. We investigate three Epstein-Zin models employed in the literature, which differ in their treatment of mortality risk, and find that some lead to normatively implausible solutions. Importantly, we find that the EIS is not always monotone in its effect on consumption volatility over time, meaning that its interpretation can be ambiguous when considering an uncertain future lifetime. This has been misinterpreted in the literature to date. We also show that one particular Epstein-Zin specification is not necessarily a generalization of expected utility maximization under constant relative risk aversion, as many works wrongly claim. The third chapter investigates the normative validity of the optimal consumption and investment strategies of a discrete-time Epstein-Zin utility maximizing DC retiree who wishes to benefit from stock investment, longevity insurance, and inflation protection. A comparison of three Epstein-Zin specifications is conducted. We use a combination of qualitative and quantitative criteria to evaluate the adequacy of the optimal consumption profile, with special attention paid to the downside risk at extreme old ages. We find that it remains optimal to fully annuitize, but agents with high relative risk aversion hold precautionary savings, the level of which is impacted by the EIS and the preference specification. As discussed in the preceding chapter, the interpretation of EIS on consumption volatility is found to be ambiguous. Investigations of the optimal consumption profile reveal that agents are exposed to relatively high levels of downside risk in the long run. This is partially attributed to a time discounting factor less than 1, which implicitly (and contradictorily) assumes myopia in normative decision-making. An investigation of zero time discounting is conducted, with downside risk found be to significantly reduced in the long run. The fourth chapter focuses on retirement objective formulation. This chapter is motivated by the unsatisfactory normative solutions found in the preceding chapter under mathematically convenient objective functions. In order to develop more actionable prescriptive solutions, we seek to holistically explore actual retirement decision-making. To this end, we conduct a survey study of 1,000 Canadian (pre-)retirees age 50 to 80, on topics of retirement consumption, wealth, income, risk perception, decision making, and planning objectives. Additionally, we investigate the descriptive validity of the expected lifetime discounted utility maximization framework in predicting optimal planning behaviours. Overall, there is overwhelming evidence of heterogeneity in wealth, income, concerns, and objectives. We find a prevalence of low retirement assets, a severe underestimation of survival probabilities to an extreme old age of 95, and a strong aversion toward life annuities. Pre-retirees appear to have reasonable expectations regarding income and assets in retirement, with the median retiree relying heavily on public pension sources. (Pre-)retirees are primarily concerned with liquidity needs, consumption smoothing, inflation, and longevity in retirement, and are least concerned with bequests. We elicited risk and time preferences, and found an average RRA parameter between 1.74 to 2.48 for pre-retirees and 2.48 to 3.74 for retirees, and a median subjective time discount factor of 0.997. A study of decision-making under risky scenarios reveals dramatic differences between the actual and implied choices under the expected utility maximization framework. Particularly, in the presence of inflation risk, agents lack the understanding of the long-term cumulative impact of inflation on the cost of living. In the presence of investment risk, the upside gain drives decision-making, and the presence of minimum income protection effectively provided by public pension income induces more risk-taking behaviour. The last chapter concludes the thesis, and proposes general directions for future work in retirement planning research.