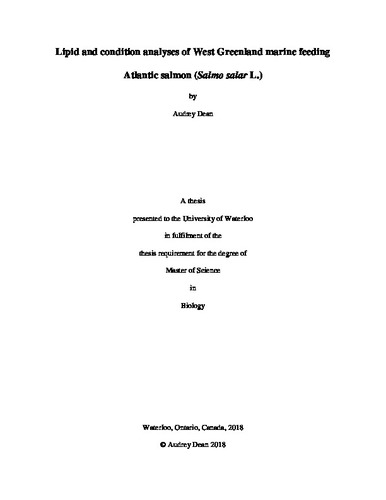 A regime shift in the Northwest Atlantic in the 1990s caused changes to the diet and productivity of marine-feeding Atlantic salmon (Salmo salar L.) off the West Greenland coast. Investigations into the implications of the regime shift for the lipid reserves of summer feeding Atlantic salmon have yet to be conducted, although lipid accumulation is likely linked to survival and may be a potential factor driving observed declines in abundance. For this study, Atlantic salmon were captured and sampled at three locations (Sisimiut: 66.94°N, 53.67°W; Nuuk: 64.17°N, 51.73°W; and Qaqortoq: 60.72°N, 46.04°W) along an 875 km section of the West Greenland coast spanning three years (2009-2011), and dorsal muscle lipids were extracted to assess the variability of lipid stores and potential linkages with fish condition, diet, sea surface temperature (SST), and growth. Lipids varied between one sea-winter and multi-sea-winter fish but not between North American- and European-origin fish. Lipids varied by latitude of origin in one sea-winter fish, with differences existing only between fish captured at Sisimiut and Nuuk and at Sisimiut and Qaqortoq. Correlations between fish condition and lipids were found for North American one sea-winter fish captured in Sisimiut and Qaqortoq in 2009 and Nuuk in all years. Correlations between weight and lipids were found for North American one sea-winter fish in all communities in 2009 and 2010. These findings suggest the importance of local feeding conditions and maturation in accounting for lipid variability and suggest the need for the incorporation of mesenteric fat and liver lipid reserves into future analyses of Atlantic salmon lipid content. Percent lipids in North American one sea-winter Atlantic salmon increased with increasing week of capture until standard week 40 at which point lipid content began to decline. Percent lipids correlated negatively with SST, δ13C, and growth rate and positively with δ15N. No correlations were found between percent lipids and short-term diet. Increasing sea surface temperature appears to have a negative impact on lipid accumulation, with more energy being allocated towards growth as temperatures increase. In addition, arrival timing appears to be an important determinant of forage success, which likely plays a large role in lipid accumulation. Finally, proportions of prey, or any available combination of prey items, in the gut did not correlate with percent lipid, suggesting that singular samplings of gut contents do not accurately reflect long-term trends of the effect of diet on fish conditions as represented by percent lipids in dorsal muscle tissue. More detailed repeat measurements of both gut contents and lipids will be needed to clearly establish diet-condition linkages in future research.