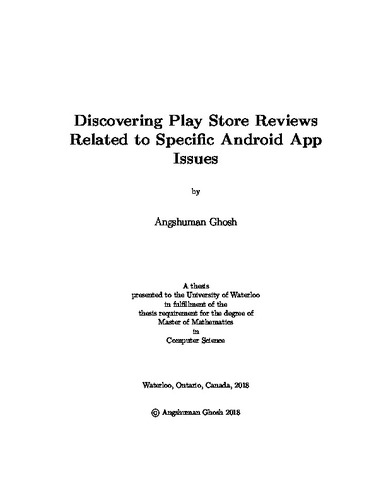 Mobile App reviews may contain information relevant to developers. Developers can investigate these reviews to see what users of their apps are complaining about. However, the huge volume of incoming reviews is impractical to analyze manually. Existing research that attempts to extract this information suffers from two major issues: supervised machine learning methods are usually pre-trained, and thus, does not provide the developers the freedom to define the app issue they are interested in, whereas unsupervised methods do not guarantee that a particular app issue topic will be discovered. In this thesis, we attempt to devise a framework that would allow developers to define topics related to app issues at any time, and with minimal effort, discover as many reviews related to the issue as possible. Scalable Continuous Active Learning (S-CAL) is an algorithm that can be used to quickly train a model to retrieve documents with high recall. First, we investigate whether S-CAL can be used as a tool for training models to retrieve reviews about a specific app issue. We also investigate whether a model trained to retrieve reviews about a specific issue for one app can be used to do the same for a separate app facing the same issue. We further investigate transfer learning methods to improve retrieval performance for the separate apps. Through a series of experiments, we show that S-CAL can be used to quickly train models that can to retrieve reviews about a particular issue. We show that developers can discover relevant information during the process of training the model and that the information discovered is more than the information that can be discovered using keyword search under similar time restrictions. Then, we show that models trained using S-CAL can indeed be reused for retrieving reviews for a separate app and that performing additional training using transfer learning protocols can improve performance for models that performed below expectation. Finally, we compare the performance of the models trained by S-CAL at retrieving reviews for a separate app against that of two state-of-the-art app review analysis methods one of which uses supervised learning, while the other uses unsupervised learning. We show that at the task of retrieving relevant reviews about a particular topic, models trained by S-CAL consistently outperform existing state-of-the-art methods.