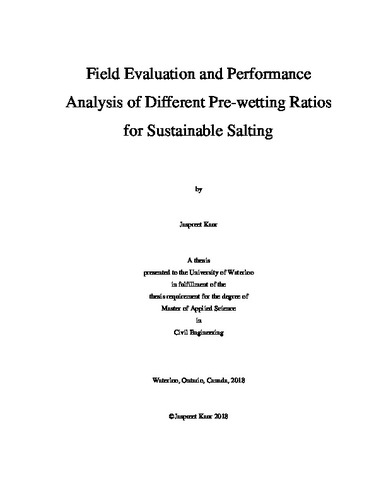 In countries like Canada road safety and mobility could be compromised to a great extent during winters due to deterioration of road surface conditions (RSC). Adverse winter weather conditions such as ice, frost, and drifting snow could generate hazardous roads and thus poor driving conditions. These adverse effects of winter weather can be significantly reduced through an affective winter road maintenance (WRM) program involving operations such as plowing and salting. WRM can help maintain an adequate level of service on roads by removing snow and ice from the road surface for improved friction between vehicle tires and road surface. WRM activities are however costly and may also have negative environmental impacts due to the use of salt. Therefore, transportation agencies are continuously seeking for smart and efficient treatment techniques to reduce salt usage and operating costs while maintaining the required level of service. Pre-wetting is one of such techniques that have gained increasing popularity in the WRM sector; it involves spraying salts with liquid chemicals before their application on the road surface. It is proven to be economically and environmentally sustainable as it lowers the amount of materials required to attain the same level of service. According to the current standards by the Ministry of Transportation Ontario (MTO), salt (NaCl) is pre-wetted at a ratio of 5% and sand is applied in a dry form for maintenance of highways in Ontario. However, the optimal pre-wet ratio of salt is still largely unknown. The objective of this research is to realize the full potential of pre-wetting and is guided by the question, whether or not more benefits can be realized if higher pre-wet ratios of salt are used while not compromising on the level of service. The aim of this study is, therefore, to compare the performance of salt at higher pre-wet ratios i.e. 10% and 20% to the standard pre-wet ratio of 5% by mass using similar granular rate (for example 130 kg/ 2-lane-km). Three measures, namely, friction, amount of material used and RSC were used to compare the performance of the three pre-wet ratios. Field trials were conducted on three sections of Highway 6, which is a Class 2 provincial highway and requires bare pavement RSC within 16 hours after storm ends according to maintenance standards of MTO, located in Durham, Western Ontario in the winter season 2016-17. Three different types of analyses were performed, namely Comparative Analysis, Visual Analysis and Regression Analysis. Results from quantitative analysis shows that salt pre-wetted at higher ratios (10% and 20%) improved friction levels by approximately 11% and 15% respectively as compared to pre-wet (PW) 5% ratio whereas the difference between friction levels attained using 10% and 20% PW ratios is minimal i.e. 4%. In terms of material usage, the use of PW 10% ratio consumed 13% more salt and 22% less sand as compared to PW 5% ratio whereas salt pre-wetted at 20% ratio consumed 19% less salt & 35% less sand as compared to PW 5% ratio. In addition to this, the visual analysis outlines better RSC and less snow coverage on the section treated with PW 20% ratio as compared to the other two sections, hence exhibiting higher snow melting capability of salt pre-wetted at 20% ratio. The regression analysis was performed to formulate the relation between measure of performance i.e. friction and other variables like air temperature, wind speed, relative humidity, etc. A categorical variable was included in the model to evaluate the impacts of the different PW ratios (5%, 10% and 20%) on snow melting performance of salt. Modeling results are similar to comparative analysis and concludes that PW 20% ratio generates higher friction levels as compared to other two ratios at any controlled condition. It can be concluded from the analysis that salt pre-wetted at a ratio of 20% is more efficient as compared to other two pre-wet ratios (5% and 10%). PW 20% ratio of salt can generate higher friction levels as well as better RSC while consuming less material as compared to the standard 5% PW ratio. The consumption of less material using PW 20% ratio of salt eventually leads to less chlorides in the soil and groundwater and can result in environmental benefits.