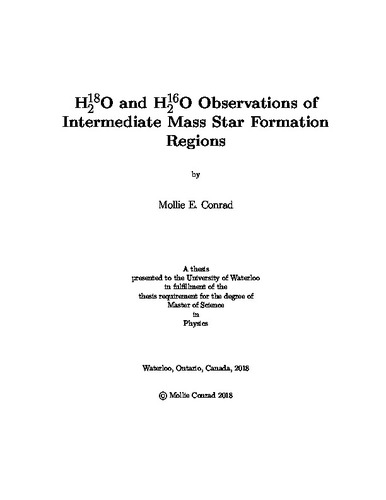 While the process of low mass (LM) star formation is a well studied area of astrophysics, the formation of high mass (HM) stars is much more complicated. The study of intermediate mass (IM) star formation is expected to shed some light on the clustered high mass regime. In this thesis, observations of 6 intermediate mass star formation regions were obtained with the Heterodyne Instrument for the Far Infrared (HIFI) aboard the Herschel Space Observatory (HSO) as part of the Water In Star-Forming regions with Herschel (WISH) project. Observations of all regions were decomposed into Gaussian components. NGC 7129 FIRS 2 is the main focus for this thesis as water observations for this source also include H₂¹⁸O. This isotopologue in conjunction with H₂¹⁶O allow for tighter constraints to be placed on the star formation regions. Modelling of the emission components corresponding to the IM YSO envelope was conducted with a radiative transfer program called RATRAN. This program allows for constraints to be placed on the chemical and physical parameters of the star formation region and the determination of the abundance of H₂¹⁸O and H₂¹⁶O present. The best-fit RATRAN models assume a freeze-out temperature of 100 K and a free-fall infall velocity towards a central mass of 1.1M☉. Three different power-law density profiles are considered with indices of α = 1.4, α = 1.5, and a hybrid of the two. The narrow -7.8 km s⁻¹ component of the 547 GHz H₂¹⁸O ortho line was determined to have an outer envelope abundance of 3.5 ± 0.3 × 10⁻¹¹ with respect to H₂ and an outer turbulent velocity of 2.25 km s⁻¹ for the α = 1.4 density profile. The inner envelope H₂¹⁸O abundance and turbulent velocity could not be constrained due to a larger optical depth (greater than 1.0) in this region. The higher energy state H₂¹⁸O lines (995 GHz and 1096 GHz) were not detected; this was confirmed by RATRAN modelling. The H₂¹⁶O ortho outer abundance was determined to be 1.5 ± 0.5 × 10⁻⁸ for the hybrid density profile, and the para outer abundance was determined to be 4.5 ± 0.3 × 10⁻⁹. This yields a total H₂¹⁶O abundance of 1.95 ± 1.0 × 10⁻⁸. The water abundance value is consistent with that of the low-mass and high-mass WISH teams (∼ 10⁻⁸), and the turbulent velocity is consistent with that of the high-mass WISH team (2.0--2.5 km s⁻¹). The water abundances derived for the other density profiles are also consistent with this conclusion. This analysis determined an abundance ratio consistent with that of Herpin et al. (2016) (a HM study). The least useful molecular lines proved to be the ortho and para H₂¹⁶O ground state lines; these are not suggested as ideal probes of star formation regions. That being said, the most useful lines proved to be the H₂¹⁸O ground state ortho 547 GHz line and the H₂¹⁶O para 988 GHz line. This study of water in intermediate mass star formation regions is to be considered alongside studies in the low and high mass regimes; this will allow for increased understanding of the overall star formation process.