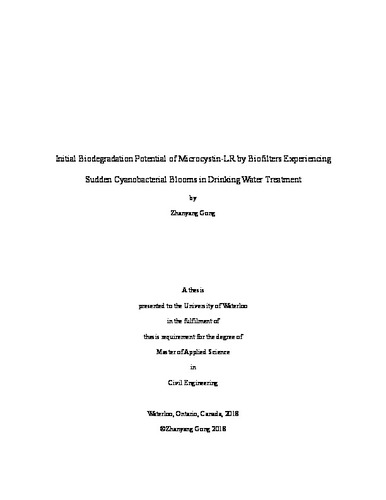 Cyanobacterial blooms have become a major cause of drinking water problems because certain metabolites from cyanobacteria are toxic to human health. Microcystin-LR (MC-LR) is one of the most commonly detected cyanotoxins. In this study, a green water treatment technology, biofiltration, was tested for its potential in removing MC-LR from lake water that was used as a source of drinking water. Previous research has shown that biofilms growing in biofilters may have the ability to biodegrade MC-LR. However, there still lacks evidence of the validity and response mechanisms of rapid flow biofilters for toxin removal when cyanobacterial blooms occur in drinking water sources. In this study, two types of experiments were conducted: 1) bench-scale biofilter column testing, and 2) bottle shaker tests. In both experiments, liquid chromatography-mass spectrometry (LC-MS) was used to analyze the concentration of microcystin-LR in water samples, and liquid chromatography with organic carbon detection (LC-OCD) was used to monitor if natural organic matter can interfere with the removal. ATP values on the media were also measured, which indicated the biological activity of the biofilm. In the column testing, rapid-flow anthracite/sand biological active biofilters were acclimated without MC-LR in the lake water feed. During the testing, natural water was spiked with MC-LR, and removal through the biofilters was tested. Control filters (biologically inactive) were used to test if the treatment for MC-LR is a physical process or a result of biodegradation. In addition, two different empty bed contact times (EBCTs) (9 min and 18 min) were tested to determine the effect on the removal rate. Results showed that the acclimated bench-scale columns did not remove MC-LR in the two 6-hour biofiltration tests. The biofilter with double the contact time (18 min EBCT) did not improve the performance, and the effluent concentration of MC-LR remained at a similar level to the inlet concentration. ATP results indicated that the biofilm on the biofilter media was active. However, there was no measurable removal of MC-LR when water was flowing through the columns. According to the ATP measurements, biofilter media had a more active biofilm in summer than in winter. However, this higher activity did not affect the ability of biofiltration to remove MC-LR, and there was no removal in the summer or winter testing. Control filters did not remove MC-LR in the two filtration tests, showing that there was no removal by adsorption. This experiment suggested that the MC-LR could not be removed immediately by the bench-scale biofiltration systems if the biofilters had never contacted with MC-LR. EBCT, water temperature and seasonal water quality changes are known to affect biofilter performance, but they were not the primary influencing factors for MC-LR removal. In the shaker testing, biofilter media was collected from three full-scale water treatment biofilters, and the media used in bench-scale biofilters was also tested. Anthracite media from 2 locations and GAC media from 2 other locations were tested. The media was mixed with water containing MC-LR in a bottle, to determine if biofilms on the media and media itself could remove MC-LR. Different types of water were tested to determine if MC-LR removal was affected by water quality changes. Autoclaved media was used as a control to test for non-biological (i.e. adsorption) removal mechanisms. Anthracite testing results showed that the biofilms on the biofilter media had the capability for removing MC-LR, but the rate was very slow. Anthracite with high ATP values from a full-scale water treatment biofilter could degrade MC-LR from 20 μg/L to 1 μg/L in approximately 40 h. Anthracite from the bench-scale columns had lower ATP values and also showed biodegradation. However, the removal rate was low, and an unknown adsorptive mechanism influenced the results. Both types of GAC media had a very strong adsorptive capacity for MC-LR, which masked the effects of biodegradation. In conclusion, this experiment showed that biofilter media revealed the potential for removing MC-LR by biodegradation. Four types of water including biofilter feed water with varying levels of nutrients, including biofilter influent and effluent water, synthetic spring water, and synthetic spring water with acetate, were tested, but results showed that nutrient supplementation did not affect biodegradation rates. Overall, results showed that although the biofilms on the biofilter media could biodegrade MC-LR in the shaker testing, biofilter columns did not show removal in the biofiltration tests. The biodegradation rate was very slow, which could be a contributing factor to the fact that no removal was found in the filtration test. Longer contacting time (two to three days) in the shaker testing might be the main factor that influenced the removal in the two experiments, either due to a slow rate of biodegradation or the long contact time that allowed the biofilter media to acclimate to the MC-LR and induce biodegradation of the compound. Recommendations for future work include a study of the mechanisms by which the anthracite media could biodegrade MC-LR. Future studies could also focus on pre-loading MC-LR to the biofilters to determine the potential for biodegradation in columns that have been continuously exposed to the compounds.