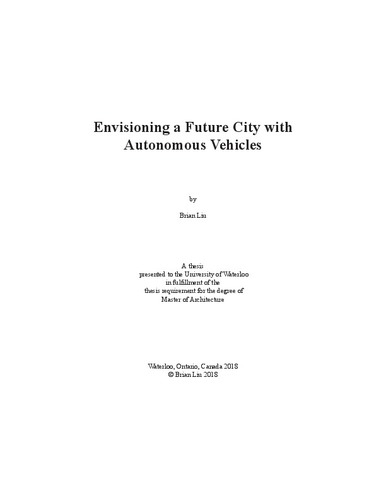 The evolution and formation of our urban fabric have an inextricable relationship with transportation and urban mobility. The revolution in speed and power of transportation as a result of the automobile in the early 1900’s brought about radical changes in how cities were designed and constructed. City streets, previously built for horse-drawn vehicles and foot traffic, were modernized with asphalt and segregated for the sake of speed and convenience. Parking lots, garages and gas stations were carved out of the city fabric to support the population’s addiction and dependence on it as the ultimate form of movement. Expansive highways and extensive networks of arterial thoroughfares were put in place as cities began to undergo urban sprawl. As North American cities have evolved and developed around the use of automobiles, the requirements to support its use have become increasingly oppressive to other forms of city life. However, an upcoming revolution in transportation and urban mobility, ushered in by the development of autonomous technology, will present urban designers with new opportunities to re-evaluate the relationship between motorists and the city. Autonomous technology has the potential to completely redefine the rules regarding the spatial requirements of automobiles and how they operate within the city. It is widely believed that AV (autonomous vehicle) technology will encourage car sharing, shifting the business model from that of predominantly individual car ownership to a service based model, resulting in a significant decrease in number of vehicles on the streets. The efficiency of AVs will also drastically reduce the amount of space required to operate vehicles, allowing for a reduction in traffic congestion and road sizes. Another consequence of AV technology will be the reduction in need for parking, as a result of car-sharing opportunities and the possibility for vehicles to perpetually be in operation. This thesis explores the implications of AVs on the urban fabric and aims to direct urban design towards incorporating AVs towards a more equitable future. The city of Toronto will be used as a lens for envisioning how a future urban landscape incorporating AVs may take shape. The city currently suffers from immense friction between the overbearing requirements of automotive infrastructure and daily city life. Accidents involving motorists and cyclists are increasingly a problem and efforts to limit the range of the automobile within the city are becoming popular. It is estimated that one third of land in Canadian cities are for cars that aren’t even moving, removing land that could otherwise be allocated to additional housing or retail space. Toronto is putting its best foot forward towards a future with AVs though with investment from all levels of government, academia and private entities. The thesis studies the impact of the automobile on a variety of actors and spaces within the city and proposes visions of how the ubiquity of AVs may change the inherent structure of typical typologies in our city today. The work serves as a guideline in how we may design a more equitable city as a result of the opportunities presented from AVs. The advent of autonomous vehicles is inevitable and the visions proposed serve as a porthole into what may become reality within just a couple of decades.