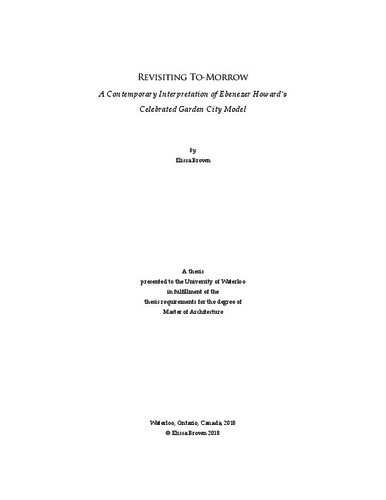 In his essay, “The Garden City Idea and Modern Planning,” Lewis Mumford heralds the Garden City as the single most influential planning document of the twentieth century.[1] Rooted in the romantic socialist tradition, the Garden City scheme addressed the overwhelming degradation of the urban environment and the resultant decline in physical health and social morale that had occurred during the rapid industrialization of English cities. The concept was met with overwhelming enthusiasm both at home and abroad, which generated an international planning movement in the early twentieth century. The Garden City provided a template for town planning that ultimately resulted in the building of thirty-two new towns in the United Kingdom and many more around the world. Howard’s model was instrumental in establishing the Town and Country Planning Association, which has had a significant influence on planning legislation, elevating the Garden City “from its origins in a cheap book…to the status of an act of parliament.”[2] More than a century has passed since Ebenezer Howard first proposed the Garden City. While the worst of the insalubrious conditions of the industrial city have dissipated, a new and equally formidable environmental crisis has arisen that emphasizes human impact on the environment and the central role humans have assumed in shaping the planet. A critical analysis of the historic Garden City reveals a complex urban form whose guiding principles share an almost surreal affinity with contemporary sustainable planning, perhaps making it more relevant to present day than any other time since its inception. This thesis explores the potential of the celebrated Garden City model to address the unfolding environmental crisis of the twenty-first century. With the aid of contemporary ecological theories, the model is reinterpreted and updated to respond to the current environmental crisis. The result is the twenty-first century Garden City, that demonstrates a new highly adaptable urban framework that structures relationships between the man-made and natural environments. Through the exploration of the Garden City, a methodology is developed for the study of historic precedents. By challenging the model to respond to the twenty-first century crisis, it is first deconstructed and evaluated, and then reconceptualized toward contemporary interests. This method of approach suggests that an historic model maintains something of value that can be offered in contemporary times. It provides an alternative way to study and learn from historic models, while projecting their values in to the future. [1] Lewis Mumford, “The Garden City Idea and Modern Planning,” in Garden Cities of To-morrow, ed. Frederic J. Osborn (London: Faber and Faber, 1970), 29. [2] Ebenezer Howard, To-Morrow a Peaceful Path to Real Reform, Original Ed. with Commentary by Peter Hall, Dennis Hardy & Colin Ward (London; New York: Routledge, 2003), 185.