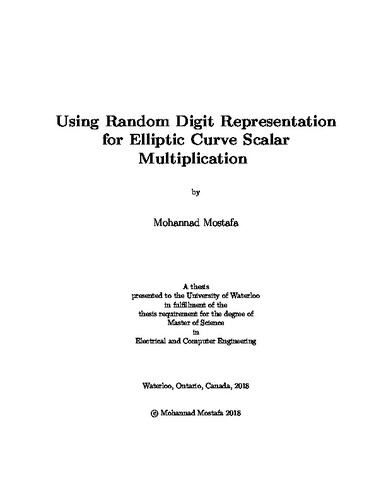 Elliptic Curve Cryptography (ECC) was introduced independently by Miller and Koblitz in 1986. Compared to the integer factorization based Rivest-Shamir-Adleman (RSA) cryptosystem, ECC provides shorter key length with the same security level. Therefore, it has advantages in terms of storage requirements, communication bandwidth and computation time. The core and the most time-consuming operation of ECC is scalar multiplication, where the scalar is an integer of several hundred bits long. Many algorithms and methodologies have been proposed to speed up the scalar multiplication operation. For example, non-adjacent form (NAF), window-based NAF (wNAF), double bases form, multi-base non-adjacent form and so on. The random digit representation (RDR) scheme can represent any scalar using a set that contains random odd digits including the digit 1. The RDR scheme is efficient in terms of the average number of non-zeros and it also provides resistance to power analysis attacks. In this thesis, we propose a variant of the RDR scheme. The proposed variant, referred to as implementation-friendly recoding algorithm (IFRA), is advantageous over RDR in hardware implementation for two reasons. First, IFRA uses simple operations such as scan, match, and shift. Second, it requires no long adder to update the scalar. In this thesis we also investigate the average density of non-zero digits of IFRA. It is shown that the average density of the variant is close to the average density of RDR. Moreover, a hardware implementation of the variant scheme is presented using pre-computed values stored in one dual-port memory. A performance comparison for different recoding schemes is presented by demonstrating the run-time efficiency of IFRA compared to other recoding schemes. Finally, the IFRA is applied to scalar multiplication on ECC and we compare its computation time against those based on NAF, wNAF, and RDR.