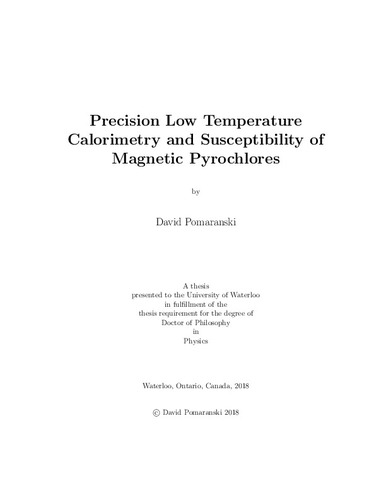 Spin-ice models feature the same statistical disorder as water ice, which is identified as the source of zero-point entropy. Gapped topological excitations with properties of monopoles are associated with the violation of the magnetic flux divergence condition ∇⋅B=0, and electric charges are constructed on the dual diamond lattice. These emergent structures have the characteristic long-range "Coulomb" algebraic correlations, as well as a linearly dispersing photon. Quantum tunneling between states, defined on closed loops of magnetic flux give rise to persistent spin-liquid dynamics. Under the influence of geometrical frustration, electronic properties of matter often crystallize into patterns described by complex symmetry, and in some cases exhibit topological order accompanied by long range entanglement. The general features of spin-ice are manifest in a large class of materials with the chemical formula R2M2O7, where R3+ is a rare earth ion from the lanthanide series, and M4+ is a transition metal. The versatility of this lattice gives rise to a wide range of interesting and tantalizing behaviours. This thesis starts with a brief review of the concept of frustration in condensed matter physics, and the ice model is motivated by several common abstractions. Relevant properties of the classical Ising pyrochlore dipolar magnet, dysprosium titanate Dy2Ti2O7 are discussed. Ytterbium titanate Yb2Ti2O7, and terbium titanate Tb2Ti2O7, are both classified as spin-1/2 pyrochlores with proposed spin-liquid behaviour at very low temperature. Their general properties are also introduced, and motivated for this study. The second chapter reviews some of the basic microscopic electronic interactions in the rare earth ions, which originate mainly from atomic 4f orbitals. The second part of this work is dedicated to experimental methods, and instrumentation used to obtain the main results of this thesis. Chapters 3 and 4 describe specific heat and magnetic susceptibility measurements, which are tools used to analyze magnetic properties of matter into the millikelvin range. Essential details involved in calibrating the temperature of a helium dilution cryostat with resistance thermometry, paramagnetic susceptibility, and nuclear orientation, are the topic of Chapter 5. In Chapter 6, specific heat measurements on Dy2Ti2O7 between 340 mK and 1 K are presented, where it was discovered that this material reaches equilibrium on extremely long timescales. Evidence for this was observed in the unconventional thermal relaxation curves, which were used to obtain new results for the heat capacity and zero-point entropy. The onset of a transition at low temperature was identified, which has eluded previous work for more than two decades. The nature of this ordering transition is also discussed in the context of studies that have recently investigated its behaviour. In Chapter 7, magnetic ac-susceptibility on Dy2Ti2O7 between 0.5 K and 1 K is used to investigate the effect of oxygen vacancy lattice defects, on the evolution of the spin-ice transition. Magnetic properties of a crystal are compared, before and after high temperature annealing in oxygen. These results highlight the prominent features in susceptibility that are affected by subtle levels of oxygen deficiency. The conclusions are aimed at deducing which characteristics of magnetic susceptibility can be associated with lattice defects. In Chapter 8, specific heat measurements on Yb2Ti2O7 between 15 mK and 660 mK are used to search for evidence of unconventional excitations associated with spin-liquid behaviour. Specific heat below 100 mK exhibits a large anomaly attributed to nuclear hyperfine interactions, which is modeled and subtracted. This reveals an uncommon power-law in the specific heat c(T) ∝ T^4, and several interpretations are discussed within the context of existing models. In Chapter 9, specific heat measurements of Tb2Ti2O7 between 15 mK and 1 K are presented, where the precise stoichiometry has been "stuffed" with an excess, or shortage of Tb3+ on the order of 0.1%. These small variations in stoichiometry have been proposed to alter the low energy state between electric quadrupole order and quantum spin liquid behaviour. Features in specific heat are found to be extremely sensitive to these variations, which is also reflected in the specific heat anomaly resulting from hyperfine interactions. The underlying electronic specific heat appears to drop exponentially below 0.1 K in two samples of nominally stuffed, and under-stuffed Tb(2+x)Ti(2-x)O(7+y). Chapter 10 is a summary of all the results, highlighting the important conclusions and implications of the research presented in this thesis. The appendices summarize a number of additional projects that were carried out during this thesis, in addition to any measurements that were performed as part of a collaboration.